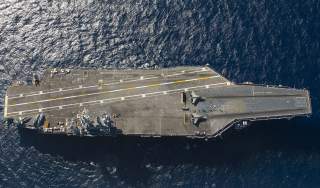 U.S. president Donald Trump hates the F-35 Joint Strike Fighter. And that could mean trouble for his Trump’s own plan to massively expand the U.S. Navy. If Trump manages to cancel the F-35, as he has hinted he might try to do, the Navy won’t have fixed-wing planes to operate from a likely growing fleet of amphibious ships.

Trump first attacked the Lockheed Martin-made F-35 while campaigning in October 2016. “I do hear that it’s not very good,” Trump told a radio host. “I’m hearing that our existing planes are better … [Test pilots] are saying it doesn’t perform as well as our existing equipment, which is much less expensive.”

The real-estate developer, who has no political experience, redoubled his assault on the long-in-development F-35 shortly after narrowly winning the U.S. electoral college and thus the presidency in November 2016. Trump lost the popular vote to rival Hillary Clinton by an unprecedented three million votes. The archaic U.S. presidential-election system awards electoral votes based on popular votes in each state, giving large states less relative power than small ones.

“Based on the tremendous cost and cost overruns of the Lockheed Martin F-35, I have asked Boeing to price-out a comparable F-18 Super Hornet!” Trump tweeted to millions of followers in December 2016.

Trump is correct that the F-35 is expensive and late. Even the least expensive F-35 variant, the conventional-takeoff “A” model, costs no less than $100 million per copy, tens of millions of dollars more than an F/A-18E/F Super Hornet. The F-35 program is several years behind schedule, but the U.S. Marine Corps and Air Force have finally declared their first squadrons to be combat-ready.

A heavily upgraded F/A-18 could, in theory, replace the F-35A and the aircraft-carrier-compatible F-35C in some missions — and at potentially lower cost. But the Super Hornet could never replace the vertically-landing F-35B jump jet variant that the U.S. Marines and the U.K. military are buying for their amphibious assault ships and aircraft carriers, respectively.

The nine Wasp and America-class assault ships that the U.S. Navy operates on behalf of the Marines lack the space, catapults and arrestor gear they would need to operate a traditional carrier plane such as the Super Hornet. The Royal Navy’s two Queen Elizabeth-class carriers, while big enough for conventional planes, are being built without catapults and arrestor wires as a cost-saving measure.

The older Anglo-American Harrier has long been out of production and is quickly dwindling in number in U.S. service. The Royal Air Force retired its last Harriers in 2010. That leaves the F-35B as the only fixed-wing fighter in production anywhere in the world that is compatible with the American assault ships and the British carriers. If Trump cancels the F-35, he will effectively eliminate at-sea tactical aviation in the U.S. Marine Corps.

For its part, the Royal Navy would have to spend potentially billions of dollars retrofitting cats and traps to its two flattops.

The potential problem will get worse. The Trump administration wants to expand the U.S. combat fleet from today’s roughly 280 vessels to no fewer than 350. Anticipating Trump’s willingness to push for a bigger fleet, in December 2016 outgoing Navy secretary Ray Mabus formally outlined a naval expansion that, among other additions, would boost the amphibious force from 31 ships to 38.

The Navy has not specified exactly which types of amphibious ships it wants to add to the fleet, but historically the sailing branch buys amphibs in sets of three — one carrier-style assault ship, a landing dock tailored for cargo and another landing dock optimized for carrying vehicles. It’s possible the Navy could buy two more assault ships as part of the planned fleet-expansion, growing the current nine-vessel assault-ship roster to 11 vessels.

With F-35s on their decks, these assault ships would represent a powerful complement to the Navy’s 11 bigger supercarriers with their squadrons of Super Hornets. Without F-35s, the assault ships — no to mention the Royal Navy’s carriers — could become glorified helicopter-carriers.

Trump has not signaled how he will square his attacks on the F-35 with his simultaneous plan for a bigger fleet.

By contrast, U.S. senator John McCain — an Arizona Republican who is chairman of the senate’s armed services committee and a vocal critic of Trump — has called on the Navy to pursue what McCain called a “new high/low mix” in its aircraft carrier fleet, building more assault ships in the vein of the current America class not only to support amphibious assaults, but also to relieve the bigger supercarriers of some of their “day-to-day” missions.

To fill out the flight decks of these new “light carriers,” McCain proposed that the Marines buy more F-35Bs — and faster — starting with an extra 20 F-35Bs over the next five years.

It’s unclear who will get their way — Trump, the Navy or McCain. The opening move in the clash over the F-35 will likely be Trump’s first defense-budget proposal, which the administration could release as early as the spring of 2017.