The Domino Effect Could Lead America to War in Syria 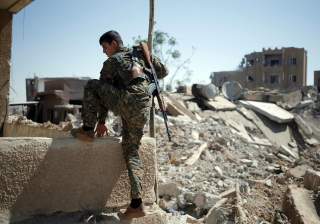 Entangled alliances and miscalculations could lead to a larger war. The launch of World War I is infamous for its deadly domino line of alliances, crises, and escalations, and it is that labyrinthine history to which my mind turns in response to the rapid-fire news out of Syria this month.

Last Monday, a U.S. coalition aircraft shot down a Syrian government plane, the second direct U.S. strike against the Bashar al-Assad regime to date. Within hours, Assad’s allies in Moscow announced Russian forces in Syria would shoot down any American or coalition planes caught west of the Euphrates, an area that comprises about a third of Syrian territory and includes Raqqa, the de facto capital of the Islamic State. The Pentagon soon responded in kind, indicating U.S. troops would “not hesitate” to return fire if their sorties face Russian interference.

Meanwhile, Assad’s other major ally, Iran, upped its military involvement in Syria, firing missiles at ISIS targets in retaliation for the terrorist organization’s attack in Tehran. This escalation comes as U.S. forces downed two Iranian drones in the span of two weeks and bombed an Iranian-backed militia.

Whether these dominoes are tipped or merely wobbling is subject to debate. There is reason to believe the statement from Moscow should be taken with a sizable grain of salt: The Russian foreign ministry claimed it shuttered the communications channel used to coordinate air activity in Syria with the Pentagon, but latest reports indicate the hotline is still open. It could be that the threat to take down U.S. aircraft is likewise more bluster than true belligerence.

So perhaps last week’s developments are just a big wobble, but that does not mean there are no dominoes. The United States’ military intervention in Syria is a dangerous game indeed, creating a real risk of great power conflict with Russia and her allies. If that hazard was not obvious before last week, it is glaring now.

It is also unnecessary, for the United States has no vital national interest at stake in Syria. View the situation without the world police glasses the Washington establishment has worn for decades, and this becomes evident. The conflict in Syria is a monstrous fight, but that does not make it our fight, a point President Trump once realized. “What will we get for bombing Syria besides more debt and a possible long-term conflict?” he asked on Twitter in 2013 with insight that seems to be missing today.

Nor is there a plausible path to anything resembling “victory” for the U.S., even the unlikely best-case scenario—a tidy defeat of ISIS and ouster of Assad achieved without tipping into war with Russia—would come at enormous human and financial cost; produce a new, debt-funded nation-building commitment of massive proportions; and, if recent misadventures in Iraq, Afghanistan, and Libya are any guide, settle into a destabilizing morass of power vacuum, proxy fighting, insurgency, and surge.

In addition to being definitionally non-defensive and fundamentally unwinnable, U.S. military intervention in Syria has no legal sanction. As Trump added in that 2013 tweet, the Constitution requires Congress to declare war in advance of any U.S. military action, and nothing resembling that basic safeguard against reckless foreign policy may be found here. The Authorizations for Use of Military Force (AUMFs) that preceded the invasions of Afghanistan in 2001 and Iraq in 2002—those long-outdated documents that offer threadbare legal cover for U.S. military interventions across the greater Mideast—cannot be stretched to authorize action against Syria by even the most gymnastic legalese. They were written with no conception of or reference to this conflict for the very good reason that in 2002, ISIS did not exist and Syria was not engulfed in civil war.

The most compelling case for military intervention in Syria for many Americans, myself and the president included, comes via the images of the immense suffering of Syrian civilians. But the hard truth is there is no guarantee American military action will speed Syria’s route to safety and peace. It is difficult to calculate this sort of thing with certainty, but credible evidence suggests U.S. intervention in Iraq and Libya unintentionally prolonged and exacerbated civilian misery. Should Syria become a theater of outright war between the United States and Russia, both nuclear powers with enormous (if enormously unequal) military might, the Syrian humanitarian crisis would grow exponentially. Given these grave risks, the same humanitarian impulse that spurs us to action must also scream a word of caution.

The Syrian regime and its Russian allies will not stop wobbling the dominoes because it is a game played on their board. Assad and his supporters are regional powers, and unlike the United States, it is their region—to varying degrees, their vital interests—at stake. If we wobble, they will wobble back. Escalation will breed escalation, and eventually, the dominoes may tip. The prudent course is to stop wobbling now, to extricate ourselves from an unnecessary and foolhardy intervention which offers America nothing to gain and much to lose.

Bonnie Kristian is a fellow at Defense Priorities. She is a weekend editor at The Week and a columnist at Rare, and her writing has also appeared in Time Magazine, CNN, Politico, Relevant Magazine, The Hill, and The American Conservative, among other outlets.