The Ebola Effect: A Long Shadow on a Successful Africa Summit 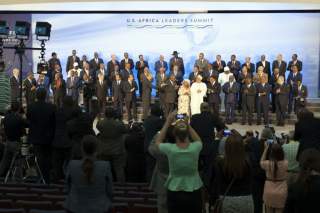 Last week’s unprecedented US Africa Summit brought dozens of African presidents and hundreds of officials and business leaders to Washington. What could have turned into a diplomatic disaster was a solid success, with announcements of new projects and investments. Thirty-three billion dollars in projects and a new group of corporate ambassadors for African opportunities is a definite step forward in changing the perception of Africa in the United States. Yet this forward progress has unfortunately been eclipsed by the Ebola crisis in the eyes of the public, demanding new effort from the US government to reassure investors that African opportunities are worth it.

While President Obama and Jeff Immelt of GE were touting Africa’s fastest growing markets, the majority of Americans were hearing about the hundreds dead in West Africa from the horrific hemorrhagic fever. Though the disease’s spread is more of a function of a lacking health care system than its virological nature, many are just associating it with Africa and Africans in general.

It is against a backdrop of this perception that the United States needs to redouble its efforts to help US companies recognize and develop the dynamic opportunities in markets as diverse as Nigeria, Kenya, Mozambique, and Ethiopia. The United States must bridge this persistent perception gap. Ernst & Young’s Attractiveness Survey for Africa revealed a stark difference in views of the region between companies with established operations in African markets and those waiting on the sidelines. The ones operating on the ground in African markets are twice as likely to be positive about the economies’ progress and prospects.

The Summit was a significant step in the right direction in bridging this gap. Blackstone partnered with Africa’s richest man, Aliko Dangote, to finance $5 billion in infrastructure deals. Coca-Cola, IBM, GE, Walmart, and Marriott all expanded their investment plans for the region. The United States certainly wants the $1 trillion that Africans will be spending by 2020 to be spent on US goods and services; it wants US companies to ride the wave of 7-10 percent growth rates to offset the stagnation of the major developed economies; and it wants US companies waiting on the sidelines to jump into the game.

The juxtaposition of 250 CEOs meeting to discuss African business with an unfolding World Health Organization-declared emergency reflects the complexity that is modern Africa. It is complex in its diversity: fifty-four countries of rich cultures and different economic trajectories. It is complex in its contradictions: many African countries—including Kenya and Nigeria—have grown and continue to grow despite the drag of lingering insecurity and instability, persistent poverty, and pernicious politics. It is complex in its uneven development: while some countries reach middle income status and converge with developed economies, others diverge and slip further behind on all socio-economic indicators. In the coming years, it will very much matter if you are born in a village in Ghana or across the border in neighboring Burkina Faso. The International Monetary Fund expects Ghana to reach full middle income status by the end of next year.

When US companies look to do business in African markets, they have to appreciate this complexity just as they have learned to do in Mexico, Indonesia, India, and Brazil. President Obama expressed this in an op-ed on the US Africa Summit: “as Africa is changing, we need to change the way we think about the continent.” Extremely rapid economic growth is neither linear nor smooth and firms will make good returns amidst and in spite of insecurity, growing economic disparity, and large scale unemployment. US companies that figure out how to succeed in African markets will benefit and those that do not will be bought by those that do. Those vested in US businesses thriving in Africa must work harder to highlight the opportunities and mark the path forward.

Future US-Africa Business Summits will help, in addition to the day-to-day support given by the US Commercial Service, Overseas Private Investment Corporation, Export-Import Bank, and the US Trade and Development Agency. Sustaining the positive buzz around Africa over the long-term will be as hard or harder than creating it. Misperception can be more contagious than Ebola and we all need to work toward a cure.