Is This the End of Boko Haram? 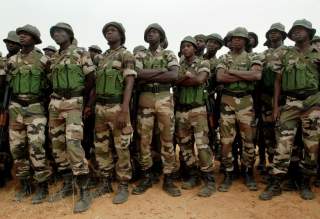 From 2014 through the February/March Nigerian military surge, Boko Haram was using advanced weapons systems and tactics to conquer and hold territory in northeastern Nigeria. At one point the insurgent group had control of a territory about the size of Belgium.

This has changed. Former Nigerian President Goodluck Jonathan increased military efforts in the region by deploying Nigeria’s 7th Division and 72nd Mobile Strike Force to the northeast along with a group of South African-led military contractors from Specialized Tasks, Training, Equipment, and Protection (STTEP). While maintaining Nigerian troop deployments since his election, current President Muhammadu Buhari has made Nigeria’s military partnership with neighboring countries and the resulting Joint Multi-National Task Force a priority. The STTEP contract has apparently ended.

This increase in direct military action may have forced Boko Haram underground, and allowed the Nigerian government to retake much of its territory. However, the government has been unable to exercise control and governance over the ostensibly recovered territory. Far from defeated, Boko Haram has yet again shown its flexibility and sophistication by shifting tactics and returning to the more asymmetric fighting strategy it had been using for years.

In fact, there was an overall decrease in Boko Haram related violence and deaths since January. However, over the last four weeks, there has been a significant resurgence in violence. Since giving up territorial control, Boko Haram has made much greater use of suicide attacks. It is safe to say that the group will continue to use this tactic as it is so hard to defend against. In most cases, the bombers appear to be women. Why women would participate in Boko Haram’s fight remains unclear, but female suicide bombers have been seen in Iraq and Afghanistan. Traditional female dress provides suicide bombers with excellent cover and concealment in Muslim territories like northeastern Nigeria.

At least as worrying is the increased geographical spread in Boko Haram attacks. In the past few weeks there have been a number of attacks in Chad and Niger. Recently, Boko Haram has also attacked targets in the capital of Nigeria, Abuja, and in Kogi State. These venues are further south than Boko Haram’s typical area of operations. More Nigerians outside of the northeast could be facing Boko Haram attacks for the first time.

There is little evidence that Boko Haram faces recruiting difficulties. Its brew of religious extremism fed by widely felt grievances against the Nigerian system remains as potent as ever. As such, it is unlikely that Boko Haram can be destroyed by force alone. Nevertheless, should the day come that Boko Haram is defeated, the Nigerian government must be able to provide the people of northeastern Nigeria with much better administration and governance to prevent another group from filling the void left by Boko Haram. For a start, the Buhari administration should move visibly against security service abuses. Buhari should also seek assistance in overhauling the police, the courts, and the jails.