The Evolving Scourge of Global Terrorism: Avoiding a Multi-City Mumbai 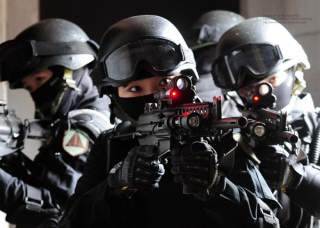 The global terrorist threat, already dangerous, is on the cusp of a rapid evolution. A recent report by the Joint Staff, describes a future featuring sharp, global, and violent ideological competition with transnational terrorist groups. Moreover, it describes a United States threatened by a range of violent ideological groups and even state sponsored Special Forces capable of both conducting sustained, coercive terrorist operations and actually building relatively advanced lethal weapons within the territory of the United States or its allies and partners.

Security measures after the September 11, 2001 attacks encouraged terrorist groups to develop a highly decentralized model of operating.  This approach relies on social media activation of small cells and even “lone wolf” disaffected individuals. It relies on surprise, makeshift bombings like the Boston Marathon attack, vehicular attacks, or mass shootings by individual gunmen.

The Mumbai attacks of 2008 revealed how a small group of determined individuals could bring a megacity to a standstill. More recently, attacks in France, Turkey, Germany and the U.S. all show that even very low-tech attacks can kill dozens of people and, through press and social media, amplify the coercive power of committed, murderous ideological groups.

Just as we begin to understand and adapt to a particular threat, terrorists innovate. These operations will soon mutate and evolve in new and troubling directions – but in several very specific and foreseeable ways. This imminent – and rapid – evolution of terrorist tactics and operational approaches demands our attention.

The future terrorist threat – armed and operating within the U.S. itself may be capable of conducting operations to not only challenge U.S. power through disruption and violence, but also win as time goes on. More troubling, these technologies may improve the ability of very small groups to sustain lethal attacks over time without significant local popular support.

These new terrorist operations will be built on several rapidly evolving and proliferating technologies. Each increases the potential for the successful planning and execution of ongoing, multi-city terrorist campaigns – not unlike an urban insurgency by allowing them to communicate securely and build and use lethal force within the U.S. homeland.

The first of these important emerging technologies is the widespread commercial introduction of end-to-end encryption in messaging applications such as Facebook’s Messenger and WhatsApp.  In an environment featuring vastly improved and widely available encryption techniques, adversaries may have a far greater ability to build private, hard to find, and secure communications networks. Moreover, these encryption technologies will enable a wide array of untraceable peer-to-peer financial transactions to allow these groups to move money where and when it is needed by its agents.

Disrupting terrorist networks by penetrating their communications and financial networks is the most common and successful approach to counterterrorism today. The use of sophisticated encryption by these networks will enable more secure and coherent trans-regional networks of agents and collaboratively plan operations with far less chance of disruption by security forces. Widespread commercial encryption will allow distributed terrorist groups to more effectively coordinate long term planning, but also to coordinated ongoing operation in real time as attacks are underway.

Terror units may be able to spread out and coordinate simultaneous attacks in many areas of a single city, or in multiple cities at the same time. When coupled with mapping and geospatial applications, terrorist units will be capable of coordinating ongoing operations in real-time using secure tactical shared operating picture to avoid police and security forces or to adapt operations to evolving situations.

John Robb asked the question, “if ISIS has developed an online ritual that can turn supporters into active attackers without exposing itself to security services (travel, planning, chatter, etc.), how many new attacks might occur?” Powerful commercial encryption technologies suggest that this question may soon be answered.

3D printing and the Terrorists’ Arsenal of Disruption

In addition to captured weapons and material, terrorist and insurgent groups such Al Qaida and the Islamic State frequently rely on extremely innovative “do it yourself” weaponry. The IED fight in Iraq and Afghanistan illustrated the staggering array of weapons that can be fashioned from commercial items. Garage door openers, cell phones, prefabricated concrete curbs, automobiles, and agricultural supplies were all part of an improvised terrorist industrial base that inflicted a great deal of suffering in both those nations.

Smuggling captured weapons for terrorist operations within the United States is problematic at best, and buying firearms and explosives commercially significantly increases the chances of discovery. In the future terrorist groups will leverage a sophisticated array of manufacturing technologies, including 3D printing to develop, build and employ unique weapons nearly anywhere on Earth.

With computerized manufacturing such as 3D printing taking off and capable of printing metal parts, high quality customized firearms and even more advanced weapons are within the terrorist’s reach. Security forces will confront a range of new and diverse printed weaponry from rudimentary homemade rockets and purpose-built explosives, to military-grade firearms, RPGs and even UAVs or missiles capable of remote or autonomous guidance.  These groups may field, for example, remotely operated sniper systems or mortars using laser rangefinders, perhaps as simple as a golf ranging binoculars, and widely-available cell phone ballistics apps.

Advanced, computer-based manufacturing technologies, will allow groups to customize and mass produce new and unconventional weapons.  National Defense University Fellow T.X. Hammes notes that “We’re several years past the ability to 3D print a drone in a single day; researchers are now refining prototype systems that can print 25 to 100 times faster than that. A single small facility with only 10 such printers will soon be able to produce 1,000 drones a day.”

Much as the world economy has globalized the design, manufacturing and supply chain, a future terrorist engineering and manufacturing ecosystem may evolve and communicate across the globe. The disruptive potential of these collaborative design techniques will fully emerge when adversaries apply them to the design, construction, and speedy refinement and evolution of a range of IEDs, drones, firearms, or other weapons.

Current state-of the art initiatives such as DARPA’s VehicleForge focused on adaptive ground vehicle design give us a glimpse how a weapons design ecosystem may work.  Collaborative online design labs allow many engineers can work together across the world using interactive computer aided design tools.

With the addition of encrypted, peer-to-peer web spaces, terror groups will have the capacity to develop and rapidly improve custom weapons designs and associated tactics, techniques, and procedures. This terrorist ‘maker’ ecosystem may bring together weapons designers around the world and test and refine designs quickly, adapting as they go. Individuals may download an operational ‘starter-kit’ and begin manufacturing equipment on powerful and capable 3D printers.

In the future, the U.S. must contend with terrorist networks able to build and maintain secure urban robotics foundries in many cities across the globe. These foundries can be linked to planners and engineers globally while locally producing and deploying many small, lethal autonomous vehicles to conduct a range of lethal operations on land, in the air, and at sea.

The importance of advances in commercial robotics to future terrorist operations should not be underestimated. One of the most difficult challenges for current terrorist operations is to recruit and train individuals committed enough to kill themselves for their malevolent ideology.  A range of future robotics capabilities will significantly decrease the physical danger for individual terrorists, allowing a larger cohort of radicalized individuals to take part in operations with a lower degree of personal risk.

As terrorists innovate further, simple cameras, drones, and off the shelf facial recognition technology may allow for precision attacks on individuals and to deliver “smart” IEDs and sensors across the world. Moreover, the emerging ‘internet of things,’ means that terrorists may access the billions of sensors, cameras, and devices that will connect to the future internet, enabling access to near-real time ground level imagery, surveillance, and pattern recognition and geospatial data for free.

Terrorist groups will use armed drones – sometimes operated remotely – to provide “air support” to lethal operations against police forces. A drone enabled terrorist air wing would significantly enhance the ability of small units to maneuver through and across a U.S. city while conducting standoff attacks against police and security forces. The introduction of 3D printed drones and automated ground vehicles (including, in the future cars with automated driver systems) will allow small squads to inflict terrible damage remotely and from a distance allowing terrorists to survive and fight another day.