The F-15 Eagle: The Amazing Fighter Jet No Air Force Can Shootdown? 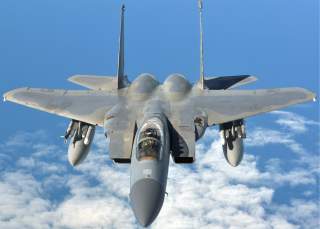 Iraqi sources claimed that on Jan. 4, 1991 – 13 days before the U.S.-led coalition launched Operation Desert Storm — Iraqi fighters intercepted a formation of Israeli F-15s over western Iraq and shot down one of the Eagles near the H-3 air base complex.

Years later, retired Iraqi brigadier general Ahmad Sadik not only repeated the claim, but insisted he inspected the resulting wreck. According to him, the downed F-15 hit the ground with such a force that the largest piece of wreckage left intact was pilot’s boot, still containing most of the foot of its dead wearer.

Sadik added that some other pieces of wreckage were sent to Iraqi air force intelligence in Baghdad. And 12 years later in 2003, American troops looted the office and destroyed the F-15’s remains.

The next Iraqi claim was much better substantiated. On Jan. 30, 1991, two Iraqi air force MiG-25PDS Foxbats scrambled to intercept a pair of U.S. Air Force Eagles patrolling between Baghdad and the Iranian border. Due to atmospheric disturbances, the Iraqi ground control vectored both interceptors to a bogus target. One MiG fired an R-40 missile, which detonated but hit nothing.

Shortly after, the same MiG-25s attacked a pair of American F-15Cs east of Khan Bani Sa’ad. Facing severe electronic countermeasures, the lead Foxbat was able to fire only one R-40RD from 12 miles. By then, one of the Eagles fired two Sparrows in return. Seeing the F-15C going down and deploying flares in attempt to avoid, the lead Iraqi pilot concluded his R-40 detonated close enough to cause serious damage.

The two Sparrows missed their target as the Foxbat made a sweeping, left-hand turn toward the north. Undaunted, the other U.S. pilot fired three additional AIM-7Ms in quick succession – but all the missiles’ rocket motors failed to fire. The frustrated Eagle flyer then had to break to the south in order to avoid the second Foxbat.

As the two MiG-25s stampeded back in direction of Tammuz air base west of Baghdad, they were nearly caught by another pair of F-15s. The last of three Sparrows fired at them impacted the runway 10 feet behind the rear Foxbat as it was landing.

Meanwhile, Iraqi ground radars were tracking the retreat of the first pair of F-15s. The radar operators concluded that one of the Eagles slowed while descending and probably crashed inside Saudi Arabia. Correspondingly, the lead Iraqi Foxbat pilot was credited with a probable kill. This was upgraded to a confirmed kill after a Bedouin smuggler reported the wreckage of an F-15 buried somewhere in northern Saudi Arabia.

Actually, no F-15C was shot down during that engagement – or, indeed, in any other air combat during Desert Storm. The U.S. Air Force did lose two F-15Es — one during the night of Jan. 17, 1991, another two days later – but both of these were credited to ground defenses. There’s no firm evidence of any Eagle ever being shot down in air combat.

But weirdly, one F-15 almost ended up in hostile hands. Sometime in late 1990, during the military build-up prior to Desert Storm, the pilot of a Saudi F-15C — upset at the prospect of fighting fellow Arabs — defected to Sudan with his plane.

The Pentagon issued a warning to all of aircrews about a possible rogue F-15. The affair ended in a matter of days, thanks to a quick reaction by the Saudi government. Word is that Riyadh paid about $50 million to Khartoum to return the fighter.