Is the F-22 Raptor Ready for a Big Comeback? 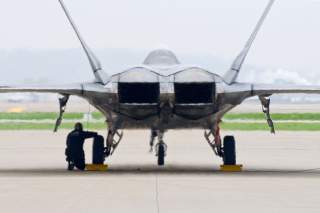 The Australian defence community has been rightly focused this past fortnight on the Turnbull Government’s announcement of the winner—France’s DCNS—of the Competitive Evaluation Process (CEP) to secure the contract for building Australia’s future submarine. But some interesting developments in terms of future air combat capabilities are occurring in the US which are also deserving of our attention—particularly given their potential bearing on Australia’s future air combat capabilities.

The US Congress’ House Armed Services Committee (HASC) has requested that the USAF begin a study on the possibilities of restarting production of the Lockheed Martin F-22 Raptor fifth generation fighter in the FY2017 defense authorization bill. Production of the F-22 was halted in 2009 at 187 aircraft, well short of the USAF Air Combat Command’s (ACC) stated requirement of 381 aircraft—let alone the original 749 aircraft originally planned.

The HASC bill justifies taking a second look at the F-22 because of "growing threats to US air superiority as a result of adversaries closing the technology gap and increasing demand from allies and partners for high-performance multi-role aircraft to meet evolving and worsening global security threats…". The bill requires a comprehensive assessment of the costs and time required associated with producing a further 194 aircraft to, at a minimum, “meet the USAF ACC target of 381 aircraft…[or] other requirements or inventory levels that the Secretary may deem necessary to support the National Security Strategy and address emerging threats.” Significantly, the bill also refers to consideration of “opportunities for foreign export and partner nation involvement if prohibiting export of the F-22 were repealed.”

So is the Raptor back? Not so fast. The bill only requests a study—it doesn’t authorize the resumption of production. Once the study is complete, Senators on the counterpart Senate Armed Services Committee would need to support it, as would both chambers of Congress and the Administration in office. The study will have to evaluate both risks and opportunities, and the risks are many.

An F-22 restart would be a complex, costly and lengthy process that would have a significant impact on other key USAF program priorities, including the F-35 JSF and the B-21 bomber. This comes at a time of growing concerns over a looming ‘bow wave’ (and here) of US defense projects that are generating ever-increasing fiscal risk into the future.

The cost of producing new F-22s is estimated at US$276 million per aircraft and the only way to fund re-starting F-22 Raptor production would be to take that money from other key projects. Renewed production of the F-22 would certainly then see reduced funds for fewer (but more expensive) F-35s—the classic procurement ‘death spiral’.

The F-22 design dates back to the late 1990s, so a technical refresh would also be needed. A lot of progress has been made in stealth, data fusion, sensors, computers and avionics since then, which the F-22 has largely missed out on. Building new Raptors as they originally came off the line wouldn’t work due to obsolete avionics and computer systems that would need to be completely replaced.

That’s both a risk—in terms of the cost and complexity of producing combat-effective aircraft within a reasonable time-frame and budget—and an opportunity. A resurrected F-22 could take advantage of advances coming out of the F-35 Follow-On Modernization process (and here)as well as other efforts towards developing a future air combat capability beyond the F-35, with the potential of then retrofitting these to ‘gen 1’ F-22s already flying.

Another major challenge is that new production facilities would need to be acquired and a new workforce trained. So a long, tortuous and expensive road would be ahead before new F-22s could roll out sometime in the next decade.

But if the F-22 was resurrected what would this mean for Australia’s defense options in the future? The 2016 Defense White Paper (4.42) and the Integrated Investment Program (5.11) both refer to the replacement of the F/A-18F Super Hornet by around 2030—right at the point where a new batch of ‘enhanced F-22s’ would be available—which is why the bill’s mention of export possibilities is significant. We’d then have the option to consider acquiring new-build F-22s to replace the Super Hornets without jeopardizing the approved 72 F-35As. A ‘high-low’ mix of enhanced F-22s and the F-35 fleet would be established by 2030 that could see the F-22 offer the RAAF an air superiority capability ‘par excellence’, while the F-35 would offer a fifth generation platform optimized for strike and reconnaissance.

If however, as seems more likely, the F-22 reboot simply doesn’t happen, or if it does and the new aircraft still aren’t available for export or—as also seems likely—they are simply too expensive for Australia to realistically consider, then we’d need to look at other options. The HASC bill is but a first small step down a very long path and at this stage, given other competing demands for limited funding, it seems unlikely to go beyond being a very interesting idea. However it’s interesting that at the same time this study is underway to re-explore F-22 production, the USAF and USN have announced they are moving away from developing a ‘sixth generation’ combat aircraft. Instead the aim is to embrace a ‘system of systems’ approach that implies a mix of unmanned and manned options for the future. So might a manned-unmanned mix of F-35’s and advanced, but lower-cost UCAVs be a better choice for the future RAAF? I’ll look at that question in my next post.