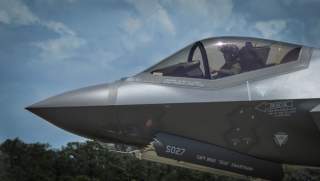 The F-35 Lightning II destroyed an aerial drone off the Coast of California by launching an AIM-9X air-to-air missile over a military test range, demonstrating the first "live" air-to-air kill test for the emerging stealth multi-role fighter.

“It's been said you don't really have a fighter until you can actually hit a target and we crossed that threshold with the first air-to-air weapon delivery of an AIM-9X,” U.S. Air Force test pilot, Maj. Raven LeClair, said in a written statement.

After launch, the missile successfully acquired the target and followed an intercept flight profile before destroying the drone, achieving the first F-35 Air-to-Air kill or “Boola Boola,” which is the traditional radio call made when a pilot shoots down a drone, Pentagon statements explained.

The AIM-9X is a short-range heat-seeking missile with an "off-boresight" capability for accuracy and features thrust-vectoring controls for increased turn capability; the F-35 can carry two AIM-9X missiles on its wings.

Designed as part of the developmental trajectory for the emerging F-35, the test-firing of the AIM-9X is intended to further the missile's ability to fire “off-boresight." This is described as an ability to target and destroy air to air targets that are not in front of the aircraft with a direct or immediate line of sight, Pentagon officials explained.

Test data and observers confirmed the F-35 identified and targeted the drone with its mission systems sensors, passed the target ‘track’ information to the missile, enabled the pilot to verify targeting information using the high off-boresight capability of the helmet mounted display and launched the AIM-9X from the aircraft to engage the target drone, a statement from the Pentagon's Joint Strike Fighter Program Office said.

Immediately prior to launching the AIM-9X, LeClair (test pilot) employed an internally carried AIM-120C missile against another target drone. This target was beyond visual range and the AIM-120C was given a successful self-destruct signal right before target impact, Pentagon statements said.