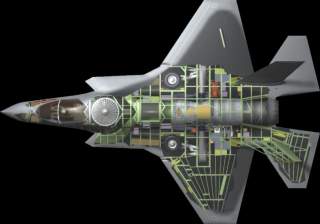 Almost a squadron’s worth of Joint Strike Fighters, Courtney Albon wrote for Inside Defense, “may not fly for months.” As Colin Clark wrote for Breaking Defense, the US Air Force and the Royal Norwegian Air Force have suspended flight operations for fifteen F-35As—thirteen American and two Norwegian—after finding “peeling and crumbling insulation in avionics cooling lines inside the fuel tanks.” As Lara Seligman of Aerospace Daily & Defense Report wrote, Lieutenant General Chris Bogdan, the program director, explained that the residue could clog the filter between the wing tank and fuselage tank. That’s annoying, if not necessarily flight-ending. Defense News quoted Lockheed Martin’s spokesman Mike Rein as saying that the problem was first noted this summer “during depot maintenance of an F-35A being prepared for initial operational capability.” Tracing the problem indicated that it may also affect another 42 aircraft currently on the production line. So how big an issue is this really? And just what else does it say about the program?

Even given the relatively sketchy details released so far, the problem most probably entered the program somewhere in Lot 7 of production. In that tranche, the RNoAF received two F-35As, and the USAF more than fifteen. Moreover, there were no Norwegian F-35s produced prior to Lot 7, and the Australian and Italian aircraft delivered in Lot 6 were not noted to have this problem. On The Aviationist, Dave Cenciotti related that the Norwegian press release insisted that the problem stemmed not from a fundamental design flaw, but instead was “caused by a supplier using improper materials and improper sealing techniques for these specific parts.” Lockheed Martin has traced the problem to a single supplier, which the company has not identified by name or even nationality. That’s reasonable, customary, and maybe even contractual. But notably, Rein also said that “there has been no discussion about changing doing business” with that firm in the future.

All this news flow begs at least two questions. First, how does a supplier start using improper materials and techniques only after six preceding production lots had been completed without apparent issue? It’s hard to say with certainty in this case. As much as production processes benefit from organizational learning, they also experience organizational forgetting, as purchasers and engineers and technicians move on or retire. Fairly, at some point, the supply chain issue is also a manufacturing issue. Someone at Lockheed Martin needed to review the subcontractor’s submissions for conformance with standards or just design specifications. Someone needed to accept delivery of the supplier’s finished goods as Lockheed work-in-progress. There’s likely plenty of blame to go around, and we can assume that plenty of people at Lockheed have spent plenty of time working to assign it.

That gets to the second question: how does such a suddenly underperforming supplier keep the business? Actually, for any given aircraft program, sticking with intermittent failure is not a shocking option. Such bespoke inputs are only swapped with significant switching costs. Usefully in this case, Lockheed’s spokesman noted that the company has been receiving cooling lines from multiple suppliers. Ceteris paribus, multiple sourcing keeps subcontractors’ costs down and quality up, even when it complicates supplier relations and materials management. But in the absence of evidence, let’s speculate a bit. It’s also conceivable that this particular supplier might have only entered the supply chain at Lot 7. Whether this supplier is old or new, Lockheed Martin could be, to some extent, politically stuck with the relationship.

The sinister beauty of the Joint Strike Fighter concept, as Ethan Kapstein wrote in Survival back in 2004, and some French industrialists were complaining to me even last week, was that the massive partnering in development and production would provide a pathway to “Capturing Fortress Europe.” All the same, ten years prior, the Defense Science Board Task Force on the Joint Advanced Strike Technology (JAST) Program—the forerunner of the JSF—had warned that “co-development should be minimized.” Those arrangements, the DSB warned, have “sometimes produced only expense and bad feeling,” and in other cases, “produced systems that worked but at high cost.” Securing development funding from seven partner governments required allocating a certain amount of development and production work to each. When done well, that means shopping much of the aerospace-producing world for best-in-class subsystems, even if the suppliers occasionally get the difficult jobs wrong. When done less well, that could mean getting stuck with an important customer’s favored company. Without more detail, the case of the crumbling cooling lines will publicly remain a slight mystery, but it’s a least a testament to the complexity of the problem.