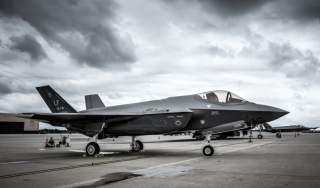 Israel has entered the 'age of the fifth generation combat aircraft'. Its first F-35I 'Adir' was rolled out at Lockheed-Martin's facility in Ft. Worth, Texas. Israel's new Minister of Defense, Avigdor Liberman, attended, and the Israeli media was filled with superlatives: 'deadlier than any other plane', 'it will change the Middle East' and so forth.

The F-35 really is a technological marvel. It has capabilities that are not available in any other combat aircraft before it. But the deal was controversial in Israel, and the project itself even more so in the US. Only recently we have learned that a senior US senator (Sen. John McCain, a retired combat pilot and Chair of the Congressional Armed Services Committee) wanted to kill the joint-program office.

The F-35 JSF project does suffer from some very serious problems. The program's supporters, as well as the Israeli deal's supporters and Israel Air Force (IAF) have called them 'maturity problems'. But this is only partially true. Beside functions that still don't properly work – there are some deeply inherent issues with the aircraft. These are not 'maturity problems', but problems that result from design decisions taken at the very beginning of the project.

The questions that arise from this situation are tough. Is this the plane that the IAF really needs? Is this the answer to Israel's security problems? What are the roles of modern combat aircraft in each type of air-ground battle? Is this particular aircraft the right solution for each of these problems? And if it is, is it right to invest such great sums of money in it? Are there better, more cost-effective solutions? And more.

But the combative analyst faces a problem. He wants to write about the problems. He knows all the difficulties. He has read every single word in the operational test and evaluation reports. But he knows the game is sold out. It was sold out on the very day that the US government decided on a 'one size fits all' kind of plane. One aircraft to serve the needs of the US Air force, Navy and Marine Corps, as well as eight international partners. On that day, competition died out. Any company that was in the business (General Dynamics, Northrop, Grumman, McDonnel Douglas.) was either swallowed by a bigger fish or moved to play in a different field. Only one game remained in town.

The IAF needs new combat aircraft, for the same reasons that we all buy new cars once every few years. Older planes get older and older and the force needs new planes, preferably newer models. The F-35 remains for the IAF the only game in town. There is no other.

Therefore we are obligated to give thanks, to praise, to laud, to glorify, to exalt, to bless, to extol and to adore the Adir, and thank the blessed Uncle Sam that gave us the right to own such a marvel, and keep our mouths shut.