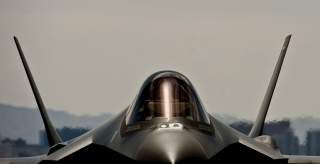 In the rush to a pretend initial operational capability, the Air Force and the Marines have actually created an aircraft completely unready to face the enemy.

Even if an F-35 squadron can get to where it is needed, when it is needed, what good is it if it can’t then fly on missions? This is one of the most enduring problems of the F-35 program. The fleet has had a notoriously poor reliability track record: it failed to achieve many of its interim reliability goals, and continued to do so through 2016. As the program creeps towards the all-important operational test phase, there are real concerns the aircraft will not be able to fly often enough to meet the testing schedule. There are also concerns about how often the jets will be able to fly when called up for combat service.

“Availability” measures how often aircraft are on hand to perform at least one assigned mission. The services strive to maintain an 80 percent availability rate for their aircraft for sustained combat operations, as most aircraft achieved, for example, in Operation Desert Storm in the Persian Gulf in 1991. This is the same rate the testing fleet needs in order to meet the IOT&E schedules. So far, the F-35 program has not even been able to meet its interim goal of 60 percent availability.

The fleet averaged a 52 percent availability rate for FY 2016. This is an improvement over recent years, but DOT&E cautions “the growth was neither steady nor continuous.” And the growth curve is behind schedule. The aircraft that will be used for operational testing need to be kitted out with specialized instruments to measure performance. There are currently 17 of these jets stationed at California’s Edwards Air Force Base. The average availability rate of this test fleet was 48 percent in the first nine months of 2016.

There are several factors dragging down the availability rate for the F-35 fleet. Many of the aircraft have had to be sent back to the depots for major overhauls, a consequence of the program’s high concurrency level. For instance, 15 F-35As needed to be sent back to correct the manufacturing defect where the foam insulation inside the jet’s fuel tanks deteriorated casting debris into the fuel. Other overhauls were necessary because there were basic design faults including major structural components that did not meet lifespan requirements, while still others were “driven by the continuing improvement of the design of combat capabilities that were known to be lacking when the aircraft were first built.”

The availability rates of both the Mission Capable and Fully Mission Capable F-35s went down in the last year. The Mission Capable rate for the fleet was 62 percent in FY 2016, down from 65 percent in FY 2015[DG3] . The Fully Mission Capable rate was only 29 percent, compared to 46 percent the year before. The Gilmore report cites failures of major combat systems like the Distributed Aperture System, Electronic Warfare System, Electro-Optical Targeting System, and the radar as the highest drivers of the drop in capability rates. Significantly, the systems said to give the F-35 its unique combat capabilities are the very systems that keep the F-35 on the ground—demonstrating no capability whatsoever.

On average, the Air Force’s F-35s could only fly two sorties a week in 2016 according to the recently released annual operational cost chart. (By comparison, the F-16 averaged nearly three sorties per week and the A-10 fleet averaged nearly four.) And it requires a great deal of maintenance to achieve even that. While there have been public statements in official releases saying how easy it is for maintenance personnel to work on the jets, the DOT&E report paints a different picture.

Problems with the supply chain are already forcing maintainers to cannibalize planes; taking parts from one plane to install on another in order to ensure at least one will fly. Cannibalization has the effect of increasing the total time to make the repairs, as it adds the extra step of stripping the part from the donor jet rather than just taking a new or repaired part out of the box. It also requires the part to be installed twice: first in the repaired jet and then in the cannibalized jet. For FY 2016, maintainers had to cannibalize parts for nearly 1 in 10 sorties flown, which is short of the program’s unimpressive goal of no more than 8 cannibalization actions in every 100 sorties.

The problems with supplies are likely to lessen as production increases, but fundamental design issues will endure. A prime example is the unique maintenance requirements inherent to the F-35’s stealth coatings. It takes much longer to make some repairs to stealth aircraft because it takes time to remove low-observable materials, fix what is broken, and then repair the stealth skin. These repairs often involve using adhesives that require time to chemically cure. Some of these materials can take as long as 168 hours—a full week—to completely dry.

When Lockheed Martin first won the contract 17 years ago, the F-35 was expected to begin operational testing in 2008. Once they failed to meet that, 2017 was supposed to be the big year for the start of the combat testing process. We now know that this process will almost certainly be delayed until 2019…and possibly 2020.

The first page of the DOT&E report lists 13 major unresolved problems with the F-35 that will prevent the program from proceeding to combat testing in August 2017. But you wouldn’t know any of that from the public comments made by officials in charge of the program. During testimony before a House Armed Services subcommittee in February, officials neglected to raise any of these issues with Congress even though the DOT&E report had been released less than a month earlier.

The scale of the challenge yet remaining with the F-35 is easily quantified in this year’s DOT&E analysis. According to the report, the F-35 still has 276 “Critical to Correct” deficiencies—these must be fixed before the development process ends because they could “lead to operational mission failures during IOT&E or combat.” Of the 276, 72 were listed as “priority 1,” which are service-critical flaws that would prevent the services from fielding the jets until they are fixed.

Much has already been made about the F-35’s shortcomings in combat, yet structural problems still remain with the basic airframe. An example of this is a failure of an attachment joint between the jet’s vertical tail and the airframe. This has been a persistent problem, as the shortcoming was discovered in the original design. Engineers discovered premature wear in a bushing used to reinforce the joint during early structural tests in 2010. The joint was redesigned and incorporated in new aircraft in 2014. In September 2016, inspectors discovered the redesigned joint had failed after only 250 hours of flight testing—far short of the 8,000 lifetime hours specified in the JSF contract.

Testing of the F-35’s mission systems continued falling behind schedule in 2016. Program managers identify and budget for baseline test points, or “discrete measurements of performance under specific flight test conditions.” These are used to determine whether the system is meeting the contract specifications. Testing teams also add non-baseline test points for various reasons to fully evaluate the entire system. Examples include adding test points to prepare for the later, more complicated tests, to re-test the system after software updates to make sure the new software didn’t alter earlier results, or “discovery test points,” which are added to identify the root cause of a problem found during other testing.

The program budgeted for 3,578 test points for the F-35’s mission systems for 2016. The test teams weren’t able to accomplish them all, finishing 3,041 while also adding 250 non-budgeted test points through the year.

Despite the slipping schedule, the F-35 program office has expressed a desire to skip many needed test points and to instead rely on testing data from previous flights—where the test aircraft used earlier software versions—as proof the upgraded system software works. But DOT&E warns that the newer software versions likely perform differently, rendering the earlier results moot. Program managers essentially want to declare the developmental testing process over and move on to operational testing, even though they haven’t finished all the necessary steps.

This is a highly risky move. DOT&E warns that following this plan