The F-35 Stealth Fighter Has a Super Gun That Can Fire an Insane 3,300 Round Per Minute 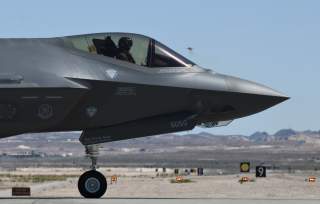 The Gatling Gun Can Fire Up To 3,300 Rounds Per Minute.

The new gun will also be integrated with the F-35’s software so as to enable the pilot to see and destroy targets using a helmet-mounted display.
Kris Osborn became the Managing Editor of Scout Warrior in August of 2015. His role with Scout.com includes managing content on the Scout Warrior site and generating independently sourced original material. Scout Warrior is aimed at providing engaging, substantial military-specific content covering a range of key areas such as weapons, emerging or next-generation technologies and issues of relevance to the military. Just prior to coming to Scout Warrior, Osborn served as an Associate Editor at the Military.com. Osborn previously served at the Pentagon as a Highly Qualified Expert with the Office of the Assistant Secretary of the Army - Acquisition, Logistics & Technology. Osborn has also worked as an anchor and on-air military specialist at CNN and CNN Headline News. This story originally appeared in Scout Warrior.