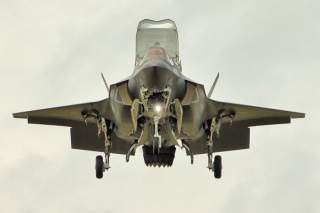 As with the air-to-air fights, we don’t know how close the bombs had to land to score a hit. We also don’t know what, if any, role the F-35’s advanced cameras and radars played in finding the targets in the first place.

But defense contractor Ratheyon has claimed the bombs generally hit within four feet of where troops on the ground point their laser targeting beams. In continuous production since 1976, the GBU-12 is in widespread service with air forces around the world.

From the available information, the Air Force is making progress in getting the F-35 ready for real world combat. But serious questions remain surrounding what the jet’s “initial” capabilities will really be when it truly matters.

Carlisle himself has offered slightly conflicting statements about what the rest of the decade will look like for his stealthy fighters. The flying branch might send the Lightning IIs to fight the Islamic State … but only if the Pentagon asks for them.

“The minute I declare initial operational capability, if the combatant commander calls me up and says they needed F-35s, I would send them,” Carlisle told reporters at the Royal International Aviation Tattoo, a massive annual air show in the United Kingdom, on June 13. “I would explain its capabilities in its current state” and then “deploy the fighter if asked.”

But Carlisle suggested “F-35s not likely to deploy to Iraq or Syria until 2017 or 2018 even if declared battle ready this year,” Defense One’s Marcus Weisgerber, at RAF Fairford for the show, tweeted out on June 7.

It’s important to note that the Air Force has the authority to set whatever requirements it thinks are reasonable to classify the F-35s as ready for combat. In 2012, Carlisle’s predecessor at Air Combat Command Gen. Mike Hostage quietly watered down the criteria to try and keep the project on schedule.

“There exists no formal uniform guidance in the Department of Defense for declaring initial operational capability … for weapon systems,” U.S. Army Major Robert Cabiness, a Pentagon spokesman, told War Is Boring in an email.

In the opinion of the Director of Operational Test and Evaluation, the F-35A’s newest software provides only a “limited combat capability.”
The U.S. Navy is the only service that plans to wait for its F-35C to finish independent operational testing and evaluation before declaring them combat capable. The U.S. Marine Corps said its F-35Bs were ready for action in July 2015.

“While nearing completion, the F-35 is still in development, and technical challenges are to be expected,” the Pentagon’s top weapons buyer Frank Kendall and the head of the main F-35 program office Air Force Lt. Gen. Christopher Bogdan, wrote in a joint statement presented to the Senate on April 26. “However, we believe the combined government-industry team has the ability to resolve current issues and future discoveries.”

The most recent concern is a discovery that the F-35’s ejection seats may not be safe. Tests have shown that pilots weighing between 103 and 136 pounds have at least a one in five chance of dying if they bail out. Despite Bogdan’s office insisting the problems were fixable, the Air Force is looking into alternatives, according to a report by Defense News.
In the meantime, we’ll just have to wait and see if the Air Force has made real progress with the vexing stealth jet — or just exposed new hurdles.