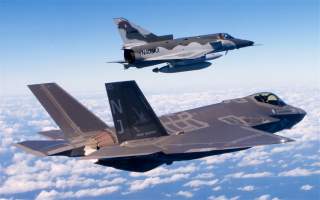 An October 2017 Government Accountability Office report details problems the services are having keeping the F-35 stealth fighter fleet ready for combat. One problem it highlighted was that, at a time when the Pentagon is desperate to ramp up production of new aircraft, the services have to wait an average of 172 days—nearly six months—to repair components for the F-35, when it should only take between 60 and 90 days.

While this aspect of the report garnered most of the headlines, the report reveals a much more fundamental and systemic problem involving most of the latest high-tech weapon systems. Defense contractors are creating complicated support systems for the increasingly complex weapon systems the Pentagon buys, which allows the contractors to secure long-term contracts for which they have no competition from other companies.

The F-35 serves as the ultimate example of this arrangement. Under the current plans, the American people will spend $406.5 billion for research, development, and procurement for a fleet of 2,456 F-35s.

That’s a staggering figure, but it pales in comparison to the costs to sustain the program. These costs are expected to top $1.2 trillion through 2060, the expected lifespan of the program. That’s around $30 billion per year. While the sustainment-to-acquisition cost ratio for the F-35 program is roughly equivalent to the historic average of 70:30, the way in which the Pentagon and the contractors reach the 70-percent figure adds more than simple financial costs to the program.

It takes a great deal of effort to keep a complicated aircraft like the F-35 flying. To get a sense of just how much support is required, you only have to look at the latest bid solicitation documents. The support contract for the Joint Strike Fighter program is being run though the Naval Air Systems Command, which opened the bid process in March 2017. But this was nothing more than a formality since it was always intended as a sole-source contract for Lockheed Martin.

According to the documents, Lockheed will provide a number of services to support all of the currently fielded F-35s. Under the terms of the contract, the contractor will produce spare parts, support equipment, training materials and infrastructure and manage the Autonomic Logistics Information System, among a great deal else.

The full list shows exactly how much the Pentagon depends on the contractors to keep its weapons and vehicles working properly. And because these contracts are so valuable, the companies have very little incentive to design themselves out of their products by building a system that can be maintained by uniform personnel without the need to depend upon contractors.

Defense contractors are creating complicated support systems for the increasingly complex weapon systems the Pentagon buys, which allows the contractors to secure long-term contracts for which they have no competition from other companies.

The F-35 program is off to a bad start maintenance-wise. According to the GAO report, during the first nine months of 2017, 20 percent of the F-35 fleet was unable to fly because the spare parts they needed were unavailable. Nearly 20 percent of the F-35’s replacement parts require at least two years to be delivered. Lockheed is also late in delivering details on how to perform the necessary maintenance procedures to the services, which makes it difficult for the maintainers at the unit level to properly troubleshoot problems with the aircraft.

One squadron reported maintenance staff pulling parts from the aircraft in the mistaken belief they were broken and ordering new ones from the contractor. An official at one of the depot maintenance facilities that handles major repairs reported that 68 percent of the parts received at their shop did not actually need to be repaired. The process of testing each of these parts at the depots takes nearly 10 hours, so even a single falsely identified broken component contributes to wasted time.

When more than two-thirds of all components coming through the system aren’t really broken, the GAO rather understates the matter by saying it is “both inefficient and can add to repair backlogs.”

The consequences of issues like this are significant. The GAO did not provide exact figures, but they reported the F-35s experience failures resulting in the loss of a mission-critical function at “more than twice the rate expected across all variants.”

The military’s dependence on contractors for basic functions incurs costs far beyond the mere financial. All American service members who have deployed to a combat zone during the war on terrorism have seen the vast numbers of contractors working behind the scenes to support the war effort. In 2007, at the very height of the surge, civilian contractors outnumbered combat troops. By 2016, contractors outnumbered troops by a three-to-one margin.

Military officials like to say that contractors actually cut costs and take care of the support functions, allowing the troops to focus on winning the war. Whether or not a contractor really “frees a Marine to fight” is debatable. Using contractors does provide a convenient means by which administrations can mask the size of our military commitments to these places by adhering to caps on the official numbers of troops deployed in the strict sense of the actual number of uniformed military personnel deployed.

These force caps rarely include contractor personnel. And contractors are hardly more economical. A 2011 Project on Government Oversight study found contractors can cost the government more than twice the amountof an equivalent government employee.

The financial costs are just part of the problem, however.

What good is a weapon system if it doesn’t work when the troops need it the most? Every penny of the taxpayers money spent on it will have been wasted if at the moment of crisis, it stands idle because it is down for maintenance. As a result, the prime contractor has a perverse incentive to build itself into the final product to the greatest extent possible.

Understanding how a weapon system works is key to properly maintaining it, and for a system that is heavily reliant on software and computing power this means the maintenance personnel would need access to all of the system’s technical information. But manufacturers don’t want to hand over the data to anyone, citing intellectual property rights.

By withholding this information, the prime contractor makes itself the only outfit capable of providing the necessary support services. No other company can compete for even one of the support contracts because the government is unable to specify the required needs.

Under this system, the original prime contractor has very little incentive to keep its prices reasonable because it will have no competition.  This is good for the contractors’ long-term business plans, but not so good for the taxpayers.

And it’s definitely not good for the men and women who depend on these systems in combat.

Every time a gadget is bolted onto a weapon or vehicle, another potential maintenance burden is added. It becomes one more thing that can break and then take the entire system out of the fight. That is the part of the problem most people probably think about. For every gadget added, the force must carry spares for it. These will get added to the ever-growing logistics tail that gets dragged behind the combat forces.

It used to be that these gadgets would be maintained by either the troops actually operating the system or by the support troops in their unit. That is the right way to do business. Weapons and equipment will ideally be designed in such a way that in the rare event they do break down, they can be repaired quickly and easily in the field by the users.

Weapons and vehicles develop cult followings in large part because of how easy they are to maintain. The reason you still see Jeeps driving the streets of the United States is because the troops driving them during World War II grew to love them in no small part because of their ruggedness and ease of maintenance

It is vitally important for the services to carefully consider each piece of equipment, and each gadget added to each piece of equipment for the real value it adds for the troop in the field. It is also vitally important to test a new system against the one it is meant to replace. The testing of the new system needs to show that not only is the benefit on the battlefield worth the monetary cost, but also that it is worth the maintenance and logistical burden that comes with the new system.