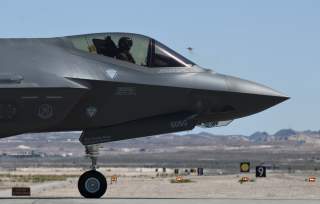 F-35 pilots will eventually be able to control a small group of drones flying nearby from the air, performing sensing, reconnaissance and targeting functions, according to Air Force Chief Scientist Greg Zacharias.

Currently the flight path, sensor payload and weapons disposal of airborne drones such as Predators and Reapers are coordinated from ground control stations. In the future, however, drones may be fully operated from the cockpit of advanced fighter jets such as the Joint Strike Fighter or F-22, Zacharias said several months ago in an interview.

“The more autonomy and intelligence you can put on these vehicles, the more useful they will become,” he said.

For instance, real-time video feeds from the electro-optical/infrared sensors on board a Predator, Reaper or Global Hawk drone could go directly into an F-35 cockpit, without needing to go to a ground control station. This could speed up targeting and tactical input from drones on reconnaissance missions in the vicinity of where a fighter pilot might want to attack. In fast-moving combat involving both air-to-air and air-to-ground threats, increased speed could make a large difference.

“It’s almost inevitable people will be saying, ‘I want more missiles on board to get through defenses or I need some EW [electronic warfare] countermeasures because I don't have the payload to carry a super big pod,’” he explained. “A high-powered microwave may have some potential that will require a dedicated platform. The negative side is you have to watch out that you don’t overload the pilot,” Zacharias added.

In addition, drones could be programmed to fly into heavily defended or high-risk areas ahead of manned fighter jets in order to assess enemy air defenses and reduce risk to pilots.

Advances in computer power, processing speed and areas referred to as artificial intelligence are rapidly changing the scope of what platforms are able to perform without needing human intervention. This is mostly developing in the form of what Zacharias referred to as “decision aide support,” meaning machines will be able to better interpret, organize, analyze and communicate information to a much greater extent -- without have humans manage each individual task.

“Decision aides will be in cockpit or on the ground and [in] more platform-oriented autonomous systems,” he said.

The early phases of this kind of technology are already operational in the F-35 cockpit through what is called “sensor-fusion.” This allows the avionics technology and aircraft computer to simultaneously organize incoming information for a variety of different sensors – and display the data on a single integrated screen for the pilot.  As a result, a pilot does not have the challenge of looking at multiple screens to view digital map displays, targeting information or sensory input, among other things.

Another advantage of these technological advances is that one human may be able to control multiple drones and perform a command and control function – while drones execute various tasks such as sensor functions, targeting, weapons transport or electronic warfare activities.

At the moment, several humans are often needed to control a single drone, but new algorithms increasing autonomy for drones could greatly change this ratio.  Zacharias explained a potential future scenario wherein one human is able to control 10-- or even 100 -- drones.

Algorithms could progress to the point where a drone, such as a Predator or a Reaper, might be able to follow a fighter aircraft by itself -- without needing its flight path navigated from human direction from the ground.

Since there are often fewer obstacles in the air compared with the ground, drones above the ground can be programmed more easily to fly toward certain predetermined locations, often called “way-points.”

This is particularly relevant because the massive amount of ISR video collected needs organizing algorithms and technology to sift through the vast volumes of gathered footage – in order to pinpoint and communicate what is tactically relevant.

“With image processing and pattern recognition, you could just send a signal instead of using up all this bandwidth saying ‘Hey, I just saw something 30-seconds ago you might want to look at the video feed I am sending right now,’” he explained.

Navy Secretary Ray Mabus has said that the service's carrier-launched F-35C will be the last manned fighter produced, given the  progress of autonomy and algorithms allowing for rapid maneuvering. The Air Force, however, has not said something similar despite the service's obvious continued interest in further developing autonomy and unmanned flight.

At the same time, despite the speed at which unmanned technology is progressing, many scientists and weapons’ developers consider human pilots will still be needed -- given the speed at which the human brain can quickly respond to unanticipated developments.

There is often a two-second lag time before a UAS in the air can respond to or implement directions from a remote pilot in a ground station, a circumstance which underscores the need for manned pilots when it comes to fighter jets, Air Force officials said.

Therefore, while cargo planes or bombers with less of a need to maneuver in the skies might be more easily able to embrace autonomous flight, fighter jets will still greatly benefit from human piloting, Air Force scientists have said.

While computer processing speed and algorithms continue to evolve at an alarming pace, it still remains difficult to engineer a machine able to instantly respond to other moving objects or emerging circumstances, Air Force scientists have argued.

However, sensor technology is progressing quickly to the point where fighter pilots will increasingly be able to identify threats at much greater distances, therefore removing the need to dogfight. As a result, there may be room for an unmanned fighter jet in the not-too-distant future, given the pace of improving autonomous technology.

Republished with permission of Defense Systems, where Kris Osborn serves as editor-in-chief.