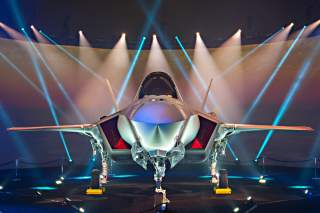 President Donald Trump is concerned about the costs associated with the F-35 Joint Strike Fighter. But the F-35 is arguably crucial to five Trump Administration priorities.  While working to control costs on the aircraft, the new administration should also consider what this jet can do to help achieve their broader policy goals:

2) Encourage allies to "pull their weight"

The F-35 is a unique stone capable of killing all five of these birds.

1) Contain China: Japan, South Korea and Australia are buying the F-35. Exporting it to Taiwan and India, and basing U.S. squadrons in the Philippines as well, would envelop the Chinese military in a decisive manner. The encircling aircraft would see without being seen, causing allied airpower to dominate any conflict in the Western Pacific.

2) Encourage allies to "pull their weight": Our allies want these planes badly. Exporting the F-35 is the easiest way to multilaterally enable them to share defense burdens.  Japan and South Korea, for example, will be far less reliant on the U.S. for security once they receive this powerful aircraft.

3) Promote domestic jobs:  Donald Trump has already successfully protected many jobs from being sent overseas. The F-35 generates thousands of American jobs, including 38,000 in Texas, 21,000 in California, and 14,000 in Florida.  If the production line is expanded the cost of each jet will come down while more jobs are created.  What's better than containing China, Iran and other potential adversaries, while generating well-paying jobs in the American manufacturing sector?

4) Balance trade deficit: Trump campaigned on a platform to lower our trade deficit. Cutting the F-35 program would be detrimental to this promise. America's best hope of attaining a trade surplus is through high-tech manufacturing exports, and aerospace products are one of America's most dynamic exports. In 2015 the aerospace and defense industry generated $142 billion worth of exports, accounting for 9.5% of all U.S. goods exports.  The F-35 is currently expected to be exported to at least 12 countries.

5) Reduce foreign entanglements: The F-35 gives nations like Taiwan and smaller Western European countries the ability to deter big, bad actors. A system as potent as the F-35 in the hands of allies would give the U.S. the flexibility to step back from many potential fights without destabilizing those regions or giving expansionist powers a free hand.

The "Arsenal of Democracy," an idea coined by President Franklin Roosevelt before World War II, was based on the premise that America is indispensable to the defense and stability of the free world. It did not, however, obligate us to be physically present in all corners of every conflict. By arming allies with excellent military capabilities that they otherwise would not have access to, we enable good allies to protect themselves. We also reserve our own military for the limited number of conflicts that a single nation can possibly endure, and those that are clearly in America's national security interests.