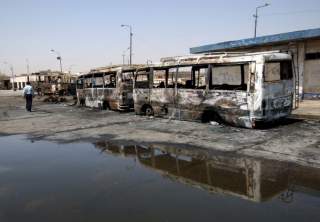 Just as “this is not a pipe”, the newly named Fragile States Index (FSI) is not the welcomed change it appears to be. Since 2003 the non-profit research and educational institution the Fund for Peace (FFP) has annually released the Failed States Index–a comprehensive ranking of “178 nations based on their levels of stability and the pressures they face” meant to forecast violence to policymakers—if only to confirm what we already knew: that the world is indeed a dark and scary place. Each year following that release the Fund for Peace has received a slew of criticism dismissing the index for creating a false binary between failed and not failed states, so much so that Krista Hendry, Executive Director of the FFP, justified renaming it The Fragile States Index in this year’s report: “we ended up having more conversations about terminology than substance.” Hendry may slap a more palatable name on it but substance, not an already ambiguous terminology, is the real reason why people will continue to dismiss the FIS. Fragile or Failed, the index maintains an equally dangerous message, which is that the cause of the world’s calamity lies in other states, not our own foreign policies.

The Fragile State Index is derived from the FFP’s Conflict Assessment System Tool. “Guided by twelve primary, social, economic, and political indicators (each split into an average of14 sub-indicators), the CAST software analyzes the collected [primary source documents] using specialized search terms that flag relevant items”, and derives a score “representing the significance of each of the various pressures for a given country.”  Ranking states for their level of economic growth, poverty, inequality, corruption, human rights abuses, access to public services, sectarian violence, and authoritarianism attributes fragility somewhat tautologically to weak state institutions and the people themselves.

FSI dangerously implies, as Lionel Beehner and Joseph Young observe,  “the antidote to many of the developed world’s conundrums related to transnational violence and terrorism is more state-building.” The current report advises states “be prepared to take the necessary actions to deal with the underlying issues or otherwise mitigate the negative effects of state fragility.” In fact, CAST flags foreign military intervention and the provision of military aid as an indication of fragility, independent of other factors.

This misleads policymakers to believe that external intervention can be a proper reaction to rather than a cause of state fragility. Yet if there’s anything to learn from over 350,000 lives killed by violence and $4.4 trillion spent in the Iraq and Afghanistan wars, it is that this neoconservative type of state building is not the answer.

In response to former President Bush’s ill-managed and misguided De-Ba'athification policy in Iraq—OPEC’s second largest oil producer—chronic sabotage and looting created massive challenges in access to medical services, sanitation, and electricity that many officials now feel is worse than under Saddam. If we look even wider, it is hard to deny that the U.S. meddling in the Middle East instigated the civil wars sweeping Iraq, Syria, and Libya, and the Egyptian revolution against Hosni Mubarak—a man historically emboldened by U.S. military aid.

Is it any surprise that most fragile states are former colonies or sites of Cold War era proxy wars, if not both? Would further state building by the U.S. have prevented the radical Islamic State of Iraq and the Levant (ISIS) from publicly crucifying eight anti-Assad fighters in Syria, or would it merely inflame this type of sectarian violence into the future?

The flaw with the FSI isn’t terminology. It is that its methodology masks the painful lessons of the past in a stale, numerical ranking of present circumstance. Claire Leigh rightly criticizes, “It gives us no clue why certain countries have the dubious distinction of topping the chart. It offers no policy prognoses or prescriptions.” With recent crises like the current ISIS incursion into Iraq putting the issue of unilateral intervention back on the table and giving think tanks greater currency in policy circles, this lacuna threatens to repeat history to the detriment of our own national interests, regardless of whether or not we call it a Failed or Fragile State. FSI’s name change serves as a reminder of how incomplete analyses can lead us to strategic blunders of the Vietnam and Iraq-type.

This is not to say that intervention is always a bad thing. Rather, all good foreign policies are contextual—historically, culturally, and strategically. Coordinating with, short of deferring authority to, regional powers like Iran may be a better alternative to stabilize a region.

The solution, then, is not to simply make the terminology more digestible or “throw FSI in the policy dustbin.” Instead, we can better inform U.S. interests abroad and refine our development strategies through additional historical and statistical comparisons of what policies worked in the past and saw success in the present rather than just marking off a checklist of “ahistorical” problems to be quickly alleviated.