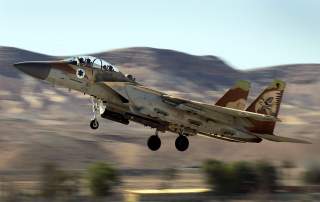 Others have speculated that the IRGC set a trap for the IASF, aiming to provoke an attack and then shoot down one or more fighter-bombers over Syria. A closer investigation of known facts reveals nothing supportive of this thesis. Foremost, and rather unsurprisingly, regime air defenses were actually slow in reacting to the first Israeli air strike. They opened fire only after guided missiles and bombs were either well on the way to their targets or already scoring hits.

This in turn poses the question. Why did the IRGC provoke Israel by sending a UAV into its air space?

The explanation is quite obvious. To score propaganda points. The IRGC, Hezbollah and the Assad regime – and their supporters at home and abroad – are now rejoicing at the downing of the F-16I. Some of their commentators exclaimed not only that a “decades-old” S-200 shot down a super-modern F-16I and “ended” the IASF’s air superiority over southwestern Syria, but that this should open “a new strategic phase of the struggle against Zionism.”

For all practical purposes, the experiences of the last 40 years have clearly shown that such announcements and threats are little but wishful thinking.

While there is no doubt that downing an advanced fighter-bomber such as an F-16I is a major feat, the fact remains that – except for one or two SAMs – most of the reactions by regime air defenses were entirely ineffective. Sure, the SAMs the regime fired included 60-year-old S-200s and 40-year-old S-125/SA-3s and 2K12/SA-6s. But many of the missiles fired at the Israeli fighter-bombers that morning were from such advanced systems including the Buk M1E/SA-17 and Pantsyr S1/SA-22. Almost all missed.