The Fed Faces Its 'Anti-Volcker Moment' 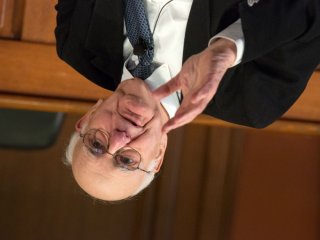 Central Banks are frightened—and with good reason. Global inflation is stubbornly low and growth is not accelerating. Central banks appear to have exhausted their toolkits, and there is a growing consensus nothing will work.

For the Fed, the situation is a mirror image of Paul Volcker’s battle with inflation in the 1970s. As Volcker accepted the Fed chair from President Jimmy Carter in 1979, inflation was running rampant. In response, Volcker’s Fed raised interest rates to levels never seen again. It is well known that he quelled inflation, but it took a long time. And it took even longer to convince the public that inflation would stay at reasonable levels.

There are multitudes of reasons inflation ran rampant in the 1970s. Oil demand was growing at a time when the Organization of Arab Petroleum Exporting Countries had significant power over the oil market and, therefore, prices. President Richard Nixon’s decisions to send Israel money to finance the Yom Kippur war and to devalue the U.S. dollar were behind the first oil shock of 1973 and 1974. The country also faced a food crisis and the breakdown of Bretton Woods (along with the value of the dollar). After a slight reprieve, the second oil shock of 1978 to 1979 sent energy prices and inflation soaring again.

Oil and food were not the only culprits—the index tracking rent was growing by more than twelve percent a year in June of 1980. A host of factors came together to dramatically escalate inflation, and keep it at elevated levels. As Volcker discovered, once inflation expectations become ingrained, they are difficult to dislodge.

As a consequence of his campaign to crush inflation, Volcker’s Fed also depressed economic activity and threw the United States into recession. Granted, Volcker’s task was made more difficult by the near decade the United States had spent with high inflation prior to his becoming chair. The 1973-1974 oil shock had thrown the United States into a recession, leaving then-Chair Arthur Burns with a difficult choice: either raise rates to combat inflation, or lower rates to fight unemployment. Burns choose to ease. Volcker, faced with a similar situation, acted decisively in the opposite direction. Burns’ incompetence, or miscalculation, likely contributed to the embedded inflation expectations that Volcker inherited.

There are several reflections of the 1970s inflation shocks in the present situation. For instance, oil has again become a variable in the equation, as falling prices have pressured expectations for future inflation downward. The United States’ tepid recovery, and booming oil production, created a scenario in which the once dominant Middle Eastern producers were forced to push prices down, not up, to maintain their market shares. Instead of the strong global growth seen in the 1970s, today’s global growth is tepid. Inflation expectations, worryingly high back then, are worryingly low today.

Likewise, policy missteps in the most important growth regions are again causing a certain amount of angst. In the 1970s, the United States was the most important driver of global growth. Now, this mantle belongs to China, whose recent move to devalue its currency sent ripples through global asset markets and created global economic uncertainty.

All this leads to the challenge of setting Fed policy today. Raising rates too quickly, and choking off any nascent inflation, could set inflation expectations too low for the US economy.

But the comparison goes beyond the relatively straightforward task of not messing up inflation expectations. Oil alone did not cause problems in the 1970s, and it would be dangerous to forget the shocks that a significant currency devaluation can cause. The Fed must avoid causing a shock from a potential devaluation of the Chinese yuan. Granted, a yuan devaluation is not as consequential as dissolution of Bretton Woods, but it could have deflationary ripple effects for the US.

Deflation causes interest payments on debt to grow as a portion of a borrower’s income making payments, more difficult to cover. This is the primary reason the Fed should be so concerned about wages and inflation being so low—with the US awash in debt, wage deflation would be a spectacularly poor outcome for the US economy.

Unlike the 1970s, unemployment and inflation are low, and the U.S. economy is in the midst of one of the longest recoveries in history. Now, the Fed finds itself attempting to push rates higher with inflation and inflation expectations stubbornly low. If it fails to push expectations higher—and keep them there, it may face an even more daunting task down the road. In essence, the Fed may be heading for its anti-Volcker moment.