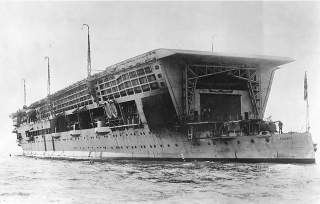 The British pilots now tried heading back to the fleet—but they were short on fuel and could only roughly estimate the Furious’s position. Only Capt. B. A. Smart managed to make it back and have his airplane properly recovered. Capt. S. Dawson, short on fuel, was forced to crash at sea, where he was rescued by the destroyer HMS Violent. Capt. W. A. Yeulett’s Camel vanished at sea. His remains, and those of his plane, were recovered from the water days later.

Three other pilots dealt with their dwindling fuel supplies by landing in neutral Denmark. Interned by the Danes under fairly comfortable circumstances, all three escaped their captors via Scandinavian ships and rejoined the Royal Navy in a few weeks’ time.

The unlikely raid was hailed as a great success in the English and American press, including an article by the New York Times. The pilots were awarded DSOs or DFCs, and the Furious received a visit from King George. In fact, the Camels had inflicted a surprising amount of damage despite their very limited bombload. Even though the German hangars survived intact, the base at Tondern was abandoned, its location near the coast considered too vulnerable. Today, a museum recounts the base’s history.

After World War I, the Furious and its two sister ships were converted into proper flattops with full-length flight decks that aircraft could reliably land upon. The Furious even served on in World War II and survived to the end of that conflict, which is more than can be said for the U.S. Navy’s first carrier, the Langley.

The Royal Navy pushed its technology as far as it could go in the Tondern raid, dispatching its fighters to the limit of their range from a ship they were not capable of landing back upon to attack a large target with tiny bombs. The fact that the raid succeeded beyond all expectations is beside the more important point: that the backers of the British carrier program had sensed the paradigm-changing potential of the aircraft carrier, even though the technology was still in its nascent stages. The foresight to experiment and invest in new ideas rather than just iterate upon old ones remains a vital quality in a world that continues to experience rapid technological change.