For the First Time Ever, the F-35B Takes-Off at Sea With Full Weapons Load and Drops Live-Bombs 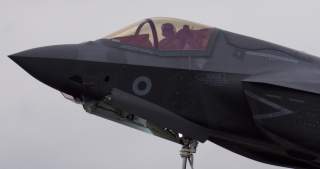 For the first time in history, the F-35B took off from a ship with a full-load of weapons. Integrating the F-35B will change tactics on-board amphibious assault ships

The Marine Corps F-35B Short-Take-Off-and-Vertical-Landing Lightning II Joint Strike Fighter took off from a Navy amphibious assault ship for the first time with a full load of weapons -- in preparation for its planned deployment in 2018.

The aircraft flew from the Navy's first America-Class Amphibious Assault Ship, the USS America, to Yuma Proving Grounds, Ariz., where it dropped live precision guided weapons on mock targets in the desert.

Bomb assembly aboard the ship includes integrating the bomb body and warhead with the stabilzing fins and computer controls. Reports from the ship say the ordnance team quickly improved the speed of their bomb assembly operation.

With the bombs built by America, the test pilots from Marine Operational Test and Evaluation Squadron1 from Edwards Air Force Base, California, conducted successful live-weapons tests for two consecutive days by dropping six GBU-12s on a live-weapons range in Yuma, Arizona, Scorza writes.

The bomb-dropping exercises with the F-35B is seen as a critical part of the aircraft's development, as the F-35 multi-role fighter is designed for land attack missions as well as amphibious assault support, ISR and air-to-air engagements.

All of this took place as part of Developmental Testing III wherein the F-35B underwent envelope expansion via a series of launches and recoveries in various operating conditions such as high sea states and winds, Capt. Sarah Burns, Marine Corps spokeswoman, told Scout Warrior.

Twelve F-35Bs from Marine Fighter Attack Squadron 211 and Marine Operational Test and Evaluation Squadron One (VMX-1), two MV-22B Ospreys, one UH-1Y Venom and one AH-1Z Viper are participating. Prior to this, the most F-35Bs aboard a ship was six.

DT-III was also the first time an operational F-35B took off with the latest Block 3F software at sea, and involved the first qualification of a British Royal Navy F-35B.

F-35B Will Change Tactics and Procedures on Amphibs:

The Navy is getting ready to launch its now more than 56-percent complete second next-generation America-Class Amphibious Assault ship with specific built-in modifications designed to accommodate the emerging Marine Corps variant of the Joint Strike Fighter - the F-35B.

The Tripoli, now called LHA 7, is a follow on ship to the USS America - the first in a fleet of planned new America-Class amphib; the Tripoli is slated to deliver in 2019.

The super modules have been integrated, service developers said.

After delivery of LHA 6 (USS America), a group of changes to the ship’s flight deck structure and equipment were necessary to accommodate the Joint Strike Fighter F-35B aircraft.

"These improvements are being incorporated into the basic build of LHA 7, which is expected to yield a better overall technical solution at reduced cost.  Additionally, the LHA 7 design will incorporate the Consolidated Afloat Network and Enterprise Services and will address fact-of-life and obsolescence instances identified throughout construction of LHA 6 and LHA 7," a Navy official said.

Thus far, the Navy and Marine Corps have made progress with a series of extensive preparations on board amphibious assault ships in order to ensure that their flight decks, sensors and weapons systems can accommodate the first ever deployment of the F-35B Joint Strike Fighter slated for 2018.

The Marine Corps short-take-off-and-landing variant of the Joint Strike Fighter, the F-35B, could be the first ever fifth-generation aircraft in the world to deploy when they serve on board several amphibs in 2018, Marine Corps and Navy leaders told Scout Warrior.

The technological modifications are already complete on the USS Wasp, an operational Navy amphib; they are also operational aboard the USS America while also being built into the USS Tripoli, Navy officials said.

Navy engineers and shipbuilders have recently done extensive work on board the USS America, the lead ship in a series of 11 planned America-class big-deck amphibs. The USS America, or LHA 6, was commissioned by the Navy October of 2014 and has completed a trail period known as “post-shakedown availability” and gone on missions to South America to connect with key allies. The ship is slated for full operational deployment with the F-35B in the future.

The USS America underwent a series of intense modifications in order to ensure that the weapons and sensors and synchronized with the Joint Strike Fighter and that flight deck can withstand the heat of the F-35B vertical take-offs-and-landings.

Once operational on Navy amphibs, the F-35B will conduct a wide range of missions to include support for amphibious ship-to-shore operations, ground operations, close-air support and what’s called “suppression of enemy air defenses,” Burns said.

"The America class is intended to operate for sustained periods in transit and operations in an Amphibious Objective Area to include embarking, transporting, controlling, inserting, sustaining and extracting elements of a Marine Air-Ground Task Force and supporting forces by helicopters and tilt rotors supported by Joint Strike Fighters F-35B," a Navy official added.

Overall, the USS Tripoli will be 844-feet long and 106-feet wide and have a weight of more than 44,000 tons. A fuel-efficient gas turbine propulsion system will bring the ship’s speed up to more than 20 knots, a Huntington Ingalls statement said.

Unlike previous amphibious assault ships, the first two America-class big deck amphibs are being built without a well deck in order to optimize the platform for aviation assets such as the MV-22 Osprey and F-35B.  The ship is configured with more deck and hangar space for aircraft and is designed to maximize the technological advantages provided by the F-35B and Osprey.

Advance Procurement funds for the third America-class ship, LHA 8, were competitively awarded to Ingalls Shipbuilding, a division of Huntington Ingalls Industries (HII), in June 2016, service officials explained. The Construction portion of the contract will be awarded in 2017.