The Four Silver Bullets of Trumpnomics 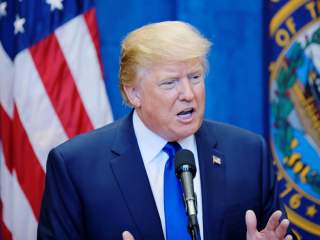 Ronald Reagan’s “supply side” genius was to recognize America could boost its growth and create millions of jobs not by increasing government spending but rather by reducing taxes and regulation. Donald Trump’s “balanced trade” epiphany is that the best way to make America great again is to eliminate the massive trade deficits now decimating the U.S. manufacturing base—and bleeding American workers dry.

The primacy of Trumpnomics and its balanced trade approach begins with this basic iron law: The growth of any nation’s gross domestic product (GDP) is propelled by only four drivers—consumption, business investment, government spending and “net exports.”

The key term for Trumpnomics in this GDP equation is “net exports.” This is defined as the exports America sells to the world minus its imports from countries like China, Mexico and Japan.

Based on simple math, it is axiomatic that when a nation like the United States runs massive and chronic trade deficits, the net export term in the GDP growth equation is a big negative. That’s exactly why trade deficits subtract directly from GDP growth.

To see how such Trumpnomics math works, just consider America’s real-inflation adjusted GDP growth rate of 2.4 percent in 2015. Following the GDP equation, consumption contributed about 2 percent to this growth rate and business investment added close to another 1 percent—pretty typical numbers for any given year.

In addition, government spending added an additional 0.13 percent to the GDP growth. At the same time, exports added a relatively meager and unusual 0.15 percent; this was because of a combination of a stronger dollar and weak demand for U.S. exports in places like a stagnating Europe.

Now adding up all of these numbers—and despite America’s meager 2015 export performance—this gets us to a growth rate of 3.2 percent; and that’s a pretty solid growth rate as recent times go. The problem, of course, is that we have not yet factored the negative impact of imports into the 2015 GDP growth equation. When we do that, we see that America’s trade deficit shaved close to a full percentage point off our growth rate; and that subtraction does indeed get us back down to the officially posted weak number of 2.4 percent for 2015.

This observation leads us to the second iron law of Trumpnomics: There is a critical relationship between America’s GDP growth rate and its rate of job creation. Here, the rough rule of thumb is that for every point of GDP growth America loses to its trade deficit, it fails to create about 1.3 million new jobs. Applying this rule of thumb, we see that in 2015 alone, the U.S. trade deficit cost America about one million jobs.

In fact, going back to the year 2001 when China joined the World Trade Organization and gained unfettered access to U.S. markets, chronic trade deficits have cost the U.S. economy more than 20 million new jobs. Not coincidentally, this is just about the number of jobs America needs to create right now to put America fully back to work at decent wages!

This observation leads to the third iron law of Trumpnomics: If America wants to eliminate the trade deficit drag on job creation, it must focus primarily on balancing its trade with China and, to a lesser extent, to balancing its trade with both Mexico and Japan. These are the three countries Donald Trump continually singles out as the sources of America’s economic malaise; and statistics bear out such rhetorical targeting.

To put that in perspective, our Chinese import dependence accounts for almost 50 percent of America’s total trade deficit in goods while the trio of China, Japan and Mexico add up to 65 percent of that deficit. That’s why the best jobs program is trade reform with China—a fact-based campaign slogan from Trumpnomics if there ever were one.

This observation leads to the fourth iron law of Trumpnomics: If the U.S. balances its trade by eliminating its chronic trade deficits, it is will not only eliminate the drag of negative net exports from its GDP equation. It will also significantly boost the business investment term in that equation—perhaps by as much as a half a percentage point a year, or over half a million new jobs created annually.

Business investment in the United States will rise for one very simple reason: Those new factories now being offshored by American multinational corporations to places like China and Mexico and Vietnam will come home to cities like Charleston, Detroit, Houston, Oklahoma City, Savannah, Youngstown and Toledo.

American multinationals will onshore their new factories for two reasons. First, Trumpnomics will eliminate the “pull” of China’s unfair trade practices like illegal export subsidies, currency manipulation, piracy and the use of sweatshops and pollution havens. A President Trump will eliminate this mercantilist pull by threatening to oppose high tariffs on China if it refuses to play by international rules. Such a threat will give China a clear choice: Either it can quite literally clean up its trade act—or face American tariffs Trump will impose to defend America’s manufacturing base against Chinese unfair trade practices.

The second reason why American factories will come home is that Trumpnomics will also eliminate the “push” of American’s onerous corporate tax rate. It’s the highest in the world, and any American corporation that now offshores its production immediately benefits from an effective tax cut. Trumpnomics cuts that corporate tax rate from 35 percent to a Reaganesque 15 percent, and it’s the most aggressive cut of any of the major candidates.

For all these reasons, Trumpnomics holds the economic high ground when it comes to creating new jobs and boosting wages. Here, it must be noted that Trump’s chief rival among the Democrats, Hillary Clinton, supported the North American Free Trade Agreement (NAFTA) as well as China’s entry into the World Trade Organization (pushed by President Bill Clinton). More, Hillary only withdrew her endorsement of the flawed Trans-Pacific Partnership after Bernie Sanders shamed (or scared) her into it.

As for Bernie Sanders, he, like Trump, wants to crack down on China’s unfair trade practices. However, Sanders also wants to spike the corporate tax rate, which will merely further push American factories offshore – and his chances of defeating Clinton grow slimmer by the day

That leaves Trump’s major Republican rivals. Here, the record is clear: Neither Marco Rubio nor Ted Cruz are credible messengers when it comes to cracking down on China specifically or bad trade deals in general. The voters understand this, and that’s why Trump continues to lead in the polls, particularly with those disaffected American workers who have borne the brunt of America’s flawed trade policies.