The Future of Military Power: R2D2? 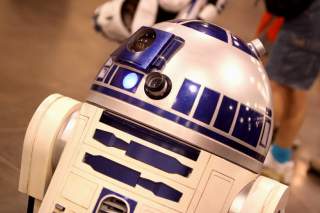 I’ve recently discussed two trends in military technology. The week before lasts’ post on the 1990s non-revolution in military affairs argued that low-tech adversaries simply make themselves scarce when faced with a technologically superior foe. Before that I discussed the impact on the survivability of expensive top-end platforms of the new generation of long-range sensors and weapons.

The former observations apply to the asymmetric campaigns that western forces have fought over the past 15 years in the Middle East. The latter apply in the ‘anti-access/area denial’ world of future major power conflict. It should be worrying for planners of future force structures that exquisitely capable but increasingly expensive high-end platforms don’t look to have a decisive role in either.

But somewhere in between there’s the ‘just right’ campaign, where those platforms are exactly what’s required. That includes the 1991 Gulf War and the NATO contribution to the Kosovo campaign in 1998–99. In both cases western forces avoided exposure to insurgency because they weren’t involved in extended ground campaigns. And Iraq and Serbia’s air defense capabilities didn’t seriously trouble American-led air power.

It was a grand time for advocates of air power. I sat through many a presentation of the virtues of bloodless (for the winners) achievement of strategic aims through precision strike. The trouble is that the 1990s, when that mindset was at its strongest and the worship of airpower reached its zenith, doesn’t look much like today’s world.

The post 2003 insurgency in Iraq was only put down by the many boots on the ground of the 2007 ‘surge’. And, as we know now, it left behind a very fragile environment, creating space for a hideous new hybrid actor in the form of ISIL. Russia is showing that state-backed hard power still plays a role in international affairs and it’s seriously rattling European notions of post Cold War peace. In the Pacific theatre the United States is facing an ever more challenging access environment as China builds its military power, especially numerous missile systems designed to keep American naval power at arm’s length.

Insurgencies and anti-access systems are both asymmetric in the sense that they don’t tackle the strengths of western forces head on. They’re post-RMA strategies that blunt the advantages otherwise conferred by sophisticated weapon systems. Neither are a new idea; the Viet Cong successfully adopted guerilla tactics against a much more powerful United States half a century ago and Egypt’s asymmetric approach to Israeli air power and armor in 1973 achieved their goals.

There are two possible responses to the contemporary versions of these challenges. The first is to push on and develop ever more elaborate platforms to maintain a technological edge. There are numerous downsides to that idea. It will require better defensive suites to allow the platforms to get close enough to do their job, with commensurate cost and weight penalties. The R&D will take ever longer, if the 19 years and counting of the F-35 wasn’t enough. And there’s always the risk that we’d be deep into diminishing returns, as adversaries think up new asymmetric responses (not least of which the ‘swarming’ of major platforms by large numbers of much cheaper systems), steal the technology for themselves, or both.

I think the better answer is summed up in the old saying about the relative merits of not beating them and joining them. If the adversaries are using long-range sensor and weapon systems on one hand and dispersion on the other, it suggests a new approach that takes the best of both worlds. Major platforms of the future mightn’t deliver end effects themselves, but a swarm of smaller sub-systems that by virtue of numbers could provide area coverage for ISR, persistence in the battle space and, when called together, locally outnumber even sophisticated defenses.

The sub-systems could be networked together, and in the future Moore’s Law will probably enable autonomous systems. In short, the future of military power might be R2D2s rather than Death Stars (PDF):

‘Just as the Death Stars’ vulnerability and inadequacy are perfectly realistic, the superior operational performance of a simple droid corresponds to real-life experience. Time and again, war-winning weapons tend to be simple, inexpensive and small.

The author of that piece could usefully have added ‘and numerous’ at the end there, but the rest of the sentiment is right. The resultant force mightn’t look as impressive as today’s—perhaps a problem for peacetime ‘presence’ and alliance assurance—but it’ll be more effective when it counts.

Two things will be required to make that future a reality. First, the temptation to make the sub-systems as capable as possible will have to be resisted—that way awaits further R&D, cost and schedule problems. Second—and more difficult to achieve—is the need for military planners to give up on Death Stars. If recent reports on the RAN’s frigate plans are to be believed, there’s a fair way to go yet.