The Future of Warfare: Fighters and Bombers with No Pilots? 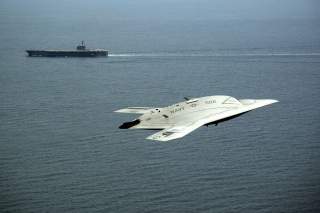 After the Abbott government approved the purchase of 72 F-35 Joint Strike Fighters for the Royal Australian Air Force (RAAF), its fast jet capability was locked in for years to come. From around 2020, the F-35s will join 24 Super Hornets (delivered from 2010) and 12 Growler electronic attack aircraft (delivered from 2015). Project AIR 6000, under which the F-35s are being acquired, still has one squadron of aircraft to acquire in the future, but the RAAF will have one of the youngest fast jet fleets in the world from the early 2020s.

As a result, the RAAF should be well placed to take a relaxed approach to the final tranche of fast jets, allowing it to monitor developments in new technologies, including unmanned combat aircraft. So we were surprised to hear the RAAF’s Chief list only manned aircraft as future possibilities during Q&A at his recent ASPI address. His shortlist included more Super Hornets, more conventional take-off F-35As or (interestingly) the F-35B ‘jump jet’ version.

His reasoning was one of timing—since we have to make a decision by 2022 or 2023, it’s unlikely that unmanned systems would be good enough for air combat in time. We’re not sure, for two reasons. First, we don’t see why a decision’s required that early. Second, we think there’s enough recent progress in unmanned systems to seriously challenge the notion that an all-manned fleet is the only viable solution from 2030.

Let’s start with the timing. The Super Hornet is nominally a 6,000 hour airframe, though the U.S. Navy (USN) has plans to extend their flying lives. According to Defence’s budget papers, Australia’s Super Hornets will clock up 4,800 hours in 2015–16 and about 4,000 hours a year for the next three. They flew 4,369 hours in 2013–14. Even at the tempo of 4,800 hours, that’s 200 annual hours per airframe—which could be sustained out to 2040 if necessary. And Australia’s aircraft aren’t subjected to the rigors of catapult launches and arrested landings on an aircraft carrier deck, so airframe fatigue won’t be an issue.

More importantly, the Air Force should provide the government with advice about the most cost effective capabilities to meet future needs. A mix of manned and unmanned aircraft could be the way of the future, even at the top end of air capabilities. One of the most significant shortcomings of manned aircraft is their endurance, which is much less of a problem with unmanned aircraft. A recent study from the Center for a New American Security showed that a manned-unmanned mix could result in very substantial savings, partly due to that endurance advantage, and partly because of a reduced need for aircraft for training.

It’s often argued that keeping a human in the cockpit is needed for the flexibility in decision making required for air combat. But even that’s looking shaky. An artificial intelligence program has already beaten an experienced fighter pilot in a simulated dogfight. It’s becoming increasingly illogical to ignore the revolutionary potential of Uninhabited Combat Air Systems (UCAS). A manned fighter that hangs back, while commanding swarms of UCAS to operate forward for beyond visual range air-to-air, strike or ISR roles, is a concept for future air operations gaining currency in the U.S. and Europe. Britain and France’s Future Combat Air System (FCAS) project is based around replacing both the Dassault Rafale and Eurofighter Typhoon with UCAS as early as 2030. And the Northrop Grumman X-47B (and here) is currently demonstrating perfect carrier landings and take offs, and airborne refuelling, at a level of precision beyond human capability.

No one is (yet) advocating replacing manned combat aircraft entirely. Legal and ethical dilemmas over lethal autonomous weapons mean that there’ll probably be a sixth, and maybe even a seventh generation fighter in the future. The RAAF will still have its 72 F-35As at the core of its force well after 2030. And it could acquire more manned aircraft as well as UCAVs if government voted the required resources.

UCAS could be upon us within the timeframe of AIR 6000 Phase 2C. The UCAS option would allow the ADF to fully benefit from dramatically reduced life cycle costs, and from the superior endurance and persistence of unmanned systems. A best of both worlds approach of a manned-unmanned mix would see Australia remain at the forefront of future air combat capabilities.

Australia should be participating in UCAS development, including by opening Australian testing facilities for existing and future UCAS, and exposing ADF personnel to their potential benefits. The RAAF has the luxury of time. It should use it to take a hard look at some promising new technologies.