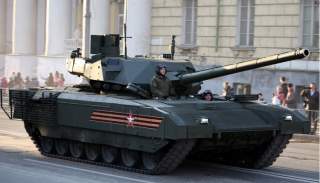 If Moscow’s claims are accurate, the new Russian active protection system would be a game-changing development in the realm of mechanized warfare. While active protection systems were thought to be effective mostly against incoming anti-tank missiles and rocket propelled grenades, most industry and defense experts had believed that active protection systems were ineffective against kinetic energy (KE) round such as the U.S. Army’s M829A4 120mm APFSDS. Thus, if the Russians have genuinely achieved a breakthrough in defeating KE anti-tank rounds, U.S. and NATO ground forces could face a very serious problem in the near future as the Armata family of combat vehicles becomes fully operational over the next several years.

The Russian-language news outlet Izvestia—citing a Russian Ministry of Defense source—has reported that the Afghanit APS has been successfully tested against incoming depleted uranium-cored APFSDS rounds flying at speeds of been 1.5km to 2km per second. “The first test interceptions of ‘crowbars’ (Russian military slang for sabot rounds) took place this year. This newest system was able to cope with such complex goals. Previously, it was thought to be impossible to destroy armor-piercing projectiles,” the Russian MOD source told state-owned Izvestia. “Much attention has been paid to the destruction of depleted uranium ‘crowbars’, which is now commonly used in NATO armor-piercing tank rounds. There is currently further work underway to improve the system, in particular, computer algorithms that control the interception.”

According to Izvestia, the key to the system is an active electronically scanned array radar built by the Tula Instrument Design Bureau, which lies at the heart of the Afghanit system. The system will not only be mounted on the fearsome T-14 main battle tank variant, but also on the T-15 heavy infantry fighting vehicle version of the Armata. It is also very likely that the Russians will mount the Afghanit on every combat vehicle that will eventually comprise the Armata family of combat vehicles.

Analysts specializing in Russian military affairs offered varied opinions about the veracity of the Izvestia report. Researcher Mikhail Barabanov, editor-in-chief of the Moscow Defense Brief—which is published by the Centre for the Analysis of Strategies and Technologies (CAST) in Russia—said that it would make sense for the Russian military to focus on the most likely threats that its armored vehicles would face in combat. “I think that the characteristics of the Armata's APS is the big secret,” Barabanov said. “But it is unlikely [the Russian military] developed the new generation of APS without directing them toward the most common threats—uranium APFSDS and top-attack missiles.”

Michael Kofman, a research scientist specializing in Russian military affairs at the federally funded Center for Naval Analyses, said he is skeptical about the Izvestia report. “I don't see it as realistic,” Kofman said. “A discarding sabot is a depleted uranium dart, the entire concept is that the material is incredibly dense to serve as a penetrator. The Afghanit APS uses a fragmentation charge and is not liable to do much to the A4—the latest variant—of U.S. munitions.  I can see it possibly pushing the dart off course with some sort of hit-to-kill approach, but I doubt much can stop it—besides combinations of ERA [explosive reactive armor] and composite armor.”

The Armata series is currently in limited production and should become operational around 2019. “As I understand it, the MOD [Ministry of Defense] ordered 100 pre-series Armata family vehicles including the T-14, T-15 and ARV [armored recovery vehicle], which will be built from 2016 to 2018,” Barbanov said. “All of those will be used for tests and development—including Army tests. Also the MOD, in 2016, signed a second contract for 70 'first series' Armata vehicles (or roughly two battalions worth) with delivery expected ‘by the end of 2019.’ That seems to coincide with when Army regular units are expected to start pilot operations with the new machines.”

Meanwhile, it is unclear when the up-gunned 152mm variant Armata main battle tank will debut. Barabanov suggests that Moscow is more than satisfied with the improved 125mm gun that is current mounted on the T-14. Thus, the Kremlin would be wiser to spend the money on improved ammunition to take full advantage of the 2A82 gun rather than spend the time and effort on a massive 152mm cannon variant.

“In my opinion, the 152mm gun on the Armata is unlikely in the near future,” Barabanov said. “According to published information, the 125mm 2A82 gun’s muzzle power on the order of 20 percent higher than the Rheinmetall 120mm L55. That margin of gun power is more than sufficient, and it is necessary to realize the surplus in the new projectiles.”

Overall, if the Armata series delivers even half the capability that the Russians claim they will eventually offer, the T-14 and its stablemates will prove to be extremely formidable combat vehicles.