The GOP Must Be the Big-Tent Party 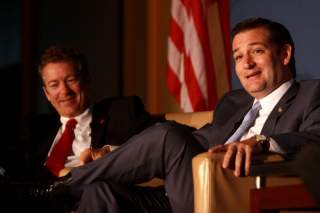 The United States’ political parties have always been amalgams of factions rather than vehicles for any single interest. Partly because of the pressures of the electoral system and partly because of the republic’s vastness, forging either of the two major parties into a political monolith has been impossible; the need to cater to a wide base of Americans tends to keep the parties broad and relatively inclusive.

This embedded pluralism of the U.S. party system has diminished somewhat in the current era of polarization but it has not evaporated entirely. The parties are still relatively broad churches. This is clearest of the contemporary Republican Party than it is of the Democrat Party, with the emerging lineup for the GOP presidential primary season providing a good case in point.

From the brash conservative “fundamentalism” of Ted Cruz to the “compassionate” conservatism of Jeb Bush and from the “angry” neo-conservatism of John Bolton to the “libertarian-ish” bent of Rand Paul, the modern Republican Party encompasses an impressive array of views and interests. On issues such as immigration, foreign policy and civil liberties, healthy disagreement would seem to reign supreme. To be sure, it would be wrong to overstate the case: there are many issues on which the GOP does not gladly suffer dissenters and key demographic groups—most racial minority groups, for example—stubbornly refuse to see the party as an ally. But the point remains that the party edifice has been built in spite of deep political fissures.

Often, these split foundations are regarded as a weakness. The Republican Party will tear itself apart in the primary season, pundits aver. Civilized debate has been replaced by “trolling” or worse. Whoever emerges as the GOP’s presidential nominee will do so battered and bruised, the bloodied recipient of countless wounds inflicted by the leaders of rival factions within the party.

Moreover, the hydra-headed nature of the party makes it difficult to attract voters because almost everybody in America can find something offensive in the Republican crop. Rand Paul’s flirtation with the anti-vaccination lobby and his apparent willingness to entertain decidedly unorthodox monetary policies will alienate moderate conservatives. Mitt Romney’s background as a venture capitalist is off-putting to blue collar Americans. The tepid paternalism of Jeb Bush is anathema to hardcore Tea Party activists. Sarah Palin’s anti-intellectual populism appears vulgar to liberal-leaning would-be Republicans, and so on.

There is some truth to such arguments. Yet they should not be overstated. The internecine warfare of primary season is a routinized occurrence and hurts both the Republicans and the Democrats equally. In any case, there is no reason to believe that voters look less favorably upon a party capable of holding a vigorous internal debate than they do upon a party that looks rigid and unimaginative. And just because some voters might be irreparably turned off by the vulgarism of Sarah Palin or the cringe-worthy cluelessness of Mitt Romney, it does not mean that these same voters cannot be excited by the supposed “big ideas” of Newt Gingrich or the straight-talking persona of Chris Christie.

Broadness and inclusivity should be seen as strengths of American political parties. Narrowness and homogeneity are weaknesses, things that lead to introspection and condemn a party to the political wilderness if not terminal decline. The most successful political parties in history have been those that forged broad coalitions out of disparate interests: the Jacksonian-era Democrats; the progressive-era Republican Party of 1896-1932; the New Deal coalition, which was solid between 1932 and the late 1960s; and the Reagan coalition, to name but a few examples.

Today, the Democrats have few problems accepting diversity within their fold. But Republicans would do well to recognize that seemingly fringe politicians such as Rand Paul, Sarah Palin and Ted Cruz have a critical role to play in sustaining the vitality of their party. While they are unlikely to secure the mantle of leadership within the GOP, they nevertheless serve a valuable function as outriders—political entrepreneurs capable of rallying motivated groups of people to the Republican banner. Without such politicians, the great catch-all parties of the American republic could not exist. Narrow sectional interests would run amok instead of being knitted together into a “big tent” coalition.

Indeed, the biggest problem with the modern Republican Party is probably not that it is too diverse, but rather that it is not diverse enough. Too many Americans dismiss the party as “not for them.” As such, while Rand Paul’s politics might vex co-partisans such as Rick Perry, Ted Cruz and Jeb Bush, it should not be forgotten that this same brand of politics can serve to excite and engage large numbers of young Americans, racial minorities and others not usually tempted by the GOP brand. If the cost of making headway among such demographics is merely to chafe against other grandees within the party, it might just be a price that the party deems worth paying.