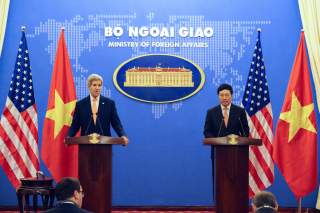 Though much remains unknown about President-elect Donald Trump’s policies toward the Asia-Pacific region, Hanoi remains confident that bilateral U.S.-Vietnam ties will continue to grow.

Since the end of the war in Vietnam and the subsequent normalization of relations in 1995, bilateral trade between the two nations has increased 100 fold from $500 million to over $50 billion. Indeed, the U.S.-Vietnam relationship seems on track to becoming a comprehensive partnership as Vietnamese ambassador H.E. Pham Quang Vinh told a lunchtime audience as at the Center for the National Interest on Nov. 16.

“We have been moving our relationship from foes, to friends and now to a comprehensive partnership,” Ambassador Pham said. “For the past 20 years we have been laying the foundation for a stronger partnership with the U.S.”

Trade is just one area where U.S.-Vietnamese relations are flourishing. There are a host of other areas where the two former foes are forging new partnerships—those include education, science and technology and even climate change among others. But Vietnam and the United States are also moving forward on a security partnership—much of which focuses on building up Hanoi’s capabilities in an evermore-difficult region of the world.

Under a 2011 memorandum, the United States and Vietnam are cooperating in the areas of maritime security, disaster relief, humanitarian search and rescue as well as peacekeeping. But those ties are expanding, Ambassador Pham said. Last year, U.S. Defense Secretary Ashton Carter visited Vietnam and signed a new agreement on expanded defense cooperation.

Under the new agreement, the United States and Vietnam have expanded their security cooperation—going beyond just the Defense Department to the State Department and others. Moreover, there has been some level of cooperation between the American and Vietnamese defense industries. Eventually, Vietnam might purchase American-made defense hardware such as maritime patrol aircraft or other systems to protect its coast. That would be the first such transactions since the collapse of the former Republic of Vietnam in 1975.

Ultimately, it is possible—if cooperation continues to expand—that the United States and Vietnam could become full-fledged allies. Hanoi is optimistic about the U.S-Vietnamese relationship going forward, but it remains to be seen exactly how things will shake out. On Nov. 17, President-elect Trump will meet with Japanese Prime Minister Shinzo Abe—which might prove to be a barometer for future U.S. relations in Asia.

Until the outcome of that meeting is made public, it will be hard to gauge what the next administration’s policies will be. “The meeting tomorrow between the President-elect and Prime Minister Abe, we will know more about how the partnership of the alliance will evolve,” Pham said. “In general, the U.S. relationship with Asia has been long-term, deeply involved and engaged.”