The Great Battle for Asia: China vs. America 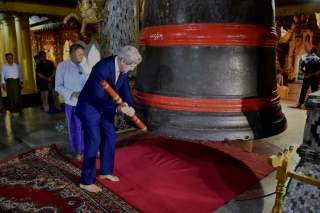 Editor’s Note: The Australian Policy Institute (ASPI) has recently been debating the future of the Asian security order. We present the final part of this debate:

Well, this has been an interesting exchange and I thank Peter Jennings for launching it, the team on The Strategist for hosting it, and distinguished colleagues for taking the time to contribute. The exchange has helped to clarify the most important underlying points of difference between us about Australia’s interests in the Asian order. And I’m grateful for the chance to offer some brief concluding thoughts.

In fact Nick Bisley put his finger on it: the key difference between my view and many others’ lies in our different ideas about the future of the regional order. I think the strategic status quo in Asia will not last, while others believe it will.

Let me recap why I think the order is going to change—indeed, is already changing. It’s simple. Asia has been stable since 1972 because China has accepted U.S. primacy as the foundation of the Asian order. China did so because it believed it was too weak to contest it effectively. Now China believes it’s strong enough to contest U.S. primacy, and it’s doing so.

Asia’s post-Vietnam order, based on uncontested U.S. primacy, has therefore passed into history. The question now is what kind of new order will take its place. There are several possibilities. None of them would be as good for Australia as the order we have known since 1972, but some would be much better for us than others. We should be trying to nudge the region towards a new order that would work well for us, and away from ones that would be bad for us.

Most of the posts in our debate differ from my position by arguing, or implying, that we should aim to preserve the status quo instead. That case is made in several different ways.

Rod Lyon rightly draws attention to the risks of moving to a new order that concedes a bigger role to China. But those risks must be balanced against the risks of trying and failing to preserve the status quo. If we refuse to accommodate China to some extent, the most likely result is escalating strategic rivalry.

That isn’t a confidence I share. Bob O’Neill gives an important insight into why China is so serious about changing the status quo when he traces the Senkaku dispute back to the Treaty of Shimonoseki, thereby connecting it to the century of humiliation which the Chinese feel so deeply. Bob has reminded us that we won’t understand what’s happening in Asia if we don’t see how things appear from what Liddell Hart called (quoting the Duke of Wellington) “the other side of the hill.”

True, that only matters if China is strong enough to fulfill its ambitions. Andrew Phillips doesn’t thinks so, and neither does Bill Tow. Andrew thinks the current order is too strong for China. Bill suggests that China isn’t really focused on competing with America for influence in East Asia because its attention is drawn more to Central Asia and it can’t afford to do both.

I’m not sure that’s so. There are limits to China’s power, of course, but I think it’s possible that China can significantly undermine U.S. leadership in Asia quite cheaply by undermining the credibility of U.S. regional alliances, and I have argued elsewhere that’s exactly what they’re trying to do.

Andrew O’Neil thinks we can’t be sure what will happen, and it’s easy to agree with him about that. It’s much harder to agree with the implication that we can and should do nothing until we are sure. If we want to have any chance of acting before it’s too late, we have no choice but to act before the outcome is certain, so we have to be willing to back our judgment.

And there are some things we do already know on which we can base those judgments—like China’s economy is already almost as big as America’s, and China’s already showing that it wants a new model of great-power relations. What new evidence is Andrew waiting for that China has the weight and the will to challenge the status quo?

Finally, Peter Jennings (in his second post) is sure that I’m urging Australia to choose between America and China, despite my claims to the contrary. I think I can see where he’s coming from. On the one hand, Peter assumes there could be no new order in Asia in which Australia didn’t have to choose between America and China. On the other, he assumes that we won’t have to choose between them as long as we hold fast to the current order. So according to Peter, arguing for a change in the order, as I do, is arguing to make a choice. And arguing to preserve the old order, as he does, is arguing against a choice.

But I think both his assumptions are wrong. On the one hand, it’s possible for a new order to emerge in Asia in which escalating rivalry between the two great powers is avoided, and in which Australia can therefore maintain close relations with both. That’s why a new order in which they share power would be best for Australia.

On the other hand, it seems to me likely indeed that resisting any accommodation of China in a new order will lead to escalating rivalry, and it seems equally clear that the more rivalry escalates the starker the choices we face between Washington and Beijing. And the closer they come to war, the closer we come to the starkest possible binary choice.

That’s why I think we’re more likely to be compelled to choose between America and China if we try to preserve the status quo than if we encourage a new order based on accommodation. And so, precisely to avoid that choice, we should argue for change. Like a true conservative, I argue for the minimum changes needed to preserve what’s most important.

Hugh White is professor of strategic studies at ANU and author of The China Choice. You can find the original posting of this article over at ASPI’s The Strategist here.