The Great China Crackdown Is Here (and Why You Should Worry) 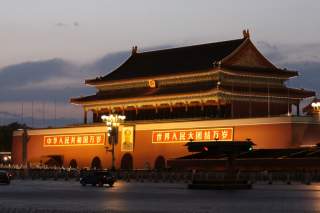 China is experiencing the most sustained domestic political crackdown since Tiananmen Square. Much attention has been devoted to the increasing state repression being directed at lawyers, journalists and civil society activists. But there is a separate and more fundamental concern.

The authoritarian rules of the game that have held sway since the beginning of the modern reform era are steadily breaking down. For all of the problems associated with China’s existing system of authoritarianism, worse consequences will emerge as these rules give way.

Since Xi Jinping’s rise to power in 2012, there has been a strand of opinion that argues that Xi is consolidating China’s existing authoritarian system. Adherents of this position acknowledge that Xi is tough. That he is harsh. And that he is riding roughshod over state and society alike with a harsh anti-corruption campaign and political crackdowns. But, so this analysis goes, tough times call for a strong leader. They argue that Xi is addressing the dangerous weakness and ineffectiveness that characterized the Hu Jintao administration. He is centralizing power. And he is building new institutions to govern China. Naturally, these will be highly illiberal and strengthened authoritarian ones.

Such trends are alleged to reflect a renewal of China’s authoritarian state. These arguments are not entirely without merit. With respect to the Party disciplinary apparatus, for example, one could single out recent efforts to strengthen the power of central disciplinary authorities by establishing offices in all central-level Party organs and state-owned enterprises, and strengthen their control over provincial disciplinary chiefs, as signs that Xi is bolstering China’s authoritarian institutions. With respect to the judiciary in China, one could point to recent efforts to establish circuit tribunals of the Supreme People’s Court in regional centers like Shenzhen and Shenyang and to vest provincial courts with control over local court funding and personnel decisions

One could argue that these developments reflect the evolution of China’s system of governance into a more centralized, more institutionalized authoritarianism. But this would be incorrect. The new trajectory of China’s governance is fundamentally different, representing a break with post-1978 practices.

Many of China’s centralizing trends are not really about building up institutions. Rather, they are about seizing control of bureaucratic apparatuses for the exercise of personalized rule. Concentrating power in the hands of a single individual should not be confused with the institutionalization of authoritarian rule.

Domestic security is one example. The new National Security Commission is directly responsible (via Meng Jianzhu) not to existing Party institutions, such as the Politburo Standing Committee, but to Xi himself. Since 2012, control of the Party disciplinary inspection apparatus has been similarly been centralized in the hands of Xi and Wang Qishan.

These institutions are also being steered in new directions. During the 1990s and early 2000s, Party disciplinary organs had been steadily professionalizing, focusing on anti-graft work rather than the rectification of political errors. Since 2012, this trend has reversed itself, with the disciplinary apparatus increasingly being used to go after not just corruption, but also sloth, failure to act, disloyalty to the top leadership and improper comments or political opinions. This represents a devolution away from institutionalized governance, not progress towards it.

China is simultaneously witnessing the breakdown of the partially institutionalized elite political practices that did develop during the reform era. The takedown of former security czar Zhou Yongkang, for example, was an obvious breach of tacit norms exempting current and former Politburo Standing Committee members from prosecution. Rumors currently swirling about age and term limit norms being potentially broken to permit Wang or Xi to stay longer in office suggest that other norms might be likely to fall as well. Veteran China watcher Wily Lam noted in a recent column that this would ‘constitute a body blow to the institutional reforms that Deng introduced in order to prevent the return of Maoist norms’.

The actual mechanisms by which the central state exerts power are also steadily sliding towards deinstitutionalized channels. Once more, these mechanisms represent a break with post-1978 practices. They include: cultivation of a budding cult of personality around Xi and a steady ideological pivot away from the Communist Party’s revolutionary socialist origins in favor of the ‘China Dream’, a revival of an ethno-nationalist ideology rooted in imperial history, tradition and Confucianism, and a revival of Maoist-era tactics of ‘rule by fear’ including televised confessions and unannounced disappearances of state officials and civil society activists alike.

Fear, tradition and personal charisma do not amount to institutional governance. As Max Weber pointed out, these are actually the antithesis of institutionalised and bureaucratic rule.

The Party-state’s reform-era efforts to build more institutionalized systems of governance are being steadily eroded. Beijing’s failure to deepen political reform when Party authorities had the opportunity to do so is now leading the system to cannibalize itself.