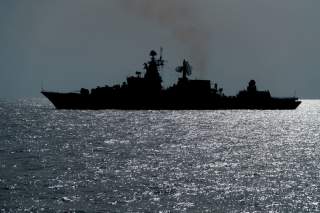 In September 2016, Russia and China started their routine naval drill, ‘Joint Sea-2016’, off the coast of China’s Guangdong province. This was the fifth joint naval drill between the two nations since 2012, but the first to take place in the South China Sea. The decision to carry out this exercise in the South China Sea was announced after The Hague ruling in July, which China has strongly rejected.

If Moscow and Beijing have been careful in stating their positions on the South China Sea ruling and the Ukraine crisis, the joint military exercises certainly presented to the rest of the world a posture of support for each other. As the Financial Times put it, the naval drill can be seen as “a sign of increasingly tight links between the world’s second and third largest militaries as they seek to counter US influence in the region.”

Facing a common threat from the United States, Russia and China have strengthened their strategic partnership through military cooperation Since 2009, China has perceived the United States’ ‘pivot’ and later ‘rebalance’ to Asia as a containment strategy against China’s rise. The US involvement in the South China Sea through freedom of navigation operations has further intensified the deterioration of bilateral relations between the two nations.

In Europe, Russia has felt similar pressure from NATO’s continued expansion to the Baltic States as a threat to its traditional sphere of influence in the region. According to the official announcement, the military drills are not targeted at any third parties. But the Chinese spokesman from the Ministry of National Defense pointed out that China and Russia need to strengthen their military capabilities to jointly handle “security threats from the sea.”

The joint naval drill benefits both China and Russia strategically. For China, the naval drill can signify Russian support for China in the South China Sea. The Chinese navy can also explore new waters and gain experience through the joint exercise. For Russia, joint naval drills are part of Putin’s policy of a ‘pivot toward Asia’. China has been significant economically and politically for Russia’s resurgence on the world stage.

Even though Russia is not directly involved in the South China Sea disputes, it stands with China in affirming that a non-claimant country — the United States — should not interfere in the regional disputes. Naval drills with China will also facilitate the Russian rebuilding of its naval forces, which used to dominate the Black Sea. By supporting China’s position in the South China Sea and Asia, Putin can also expect similar support from China on the issues of Syria and Ukraine.

Although Russia and China share a close partnership, some potential problems exist. For China, the Ukraine crisis might remind its leaders of domestic, separatist problems in Xinjiang, Tibet and Taiwan. China also faces a policy dilemma between principle and self-interest on the Ukraine issue.

For Russia, while energy trade with China can benefit the Russian economy, it will not want to become a supplier of natural resources to China. Nor is Russia willing to idly watch China’s increasing influence in Central Asia through its ‘One Belt, One Road’ initiative. Russia’s close military and weapons trade ties with Vietnam and India constitute a similar headache for Chinese leaders.

Overall, the ‘chess board’ in Eurasia and the Asia Pacific remains complex and highly contested. At the system level, despite cooperative gestures between Russia and China, geopolitical competition and strategic distrust will continue to limit the strategic partnership between the two nations. But the common threat of the United States might encourage China and Russia to overcome the strategic and historical barriers to foster close military cooperation, or even an alliance.

Small and middle powers, such as the ASEAN states and Australia, are caught between a rock and a hard place. The China–Russia joint naval drill and the relevant US–China competition in the South China Sea might indicate the onset of a Cold War in the region. Instead of picking sides, ASEAN should consider how to play a peace-broker role in mitigating the strategic competition between the United States and China.

It is time for all great powers, including the United States, China, and Russia, to reconsider their regional strategies. The 2016 nuclear tests by North Korea and the Syria crisis should remind them that there are more urgent common threats deserving their joint attention and cooperation.

The great powers need to consider how to better shoulder their responsibilities before competing for primacy in the world.