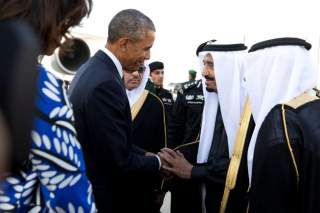 The upcoming Camp David Summit with nervous Gulf Cooperation Council (GCC) leaders has the Obama administration casting about for ways to enhance security assurances. Fearful that a probable nuclear accord with Iran would mark a strategic shift from the Arab Gulf toward Iran as regional guarantor (with the United States then ducking out to pivot to Asia), GCC countries are understandably speculating on a worst-case scenario.

America abandoning its largely informal security ties to the GCC, however, is highly unlikely. Even if negotiators reach a nuclear accord with Iran, there is no linkage of an agreement to any wider U.S.-Middle East strategy. In fact, the divorce of the Iran deal from any larger U.S. strategy was one of the major criticisms that former Secretaries of State Henry Kissinger and George Shultz made of the administration in an influential Wall Street Journal commentary.

Nonetheless, given the U.S. role as security guarantor in the Gulf, such fears cannot be wished away. The body language and occasional White House hints suggest it hopes that a nuclear accord with Iran would lead to a thaw in U.S.-Iranian relations and new cooperation in other areas. Such a fading enmity makes the Gulf’s fears almost inevitable.

It is worth noting that it has not been a case of either/or: until the 1979 Iran revolution, U.S. security policy in the Gulf was based on supporting the “twin pillars” of Iran and Saudi Arabia. The strategic importance of Saudi Arabia and the Gulf states would not disappear with an Iran deal, and remains so, at least as long as the world depends on oil. But any renewed version of America’s ‘twin pillar” diplomacy would require an end to the Sunni-Shia conflict and a détente if not reconciliation between Saudi Arabia and Iran. Don’t hold your breath for either.

A formal alliance, as the United States has with NATO or Japan, would require Congressional ratification and is off the table. Gaining Congressional approval for a formal alliance with Gulf monarchies is hard to imagine.  But instability in the region and the Gulf’s importance argues for some enhanced security relationship as sought by the GCC states.

There may be some possibilities gleaned from the longstanding U.S. security relationship to Taiwan. While short of an alliance, the 1979 Taiwan Relations Act (TRA) defines the U.S.-Taiwan security relationship. It requires the United States to consider any non-peaceful means to determine Taiwan’s future “a threat” of “grave concern.” It stipulates that in such circumstances, the United States would “provide Taiwan with arms of a defensive nature” and “to maintain the capacity of the United States to resist any resort to force or other forms of coercion” that jeopardize Taiwan’s security.

In addition to the TRA, when the United States normalized relations with China, it gave an informal pledge, known as the “Six Assurances” to Taiwan. These assurances included a U.S. commitment to keep arms sales open-ended, to not alter its position on sovereignty over Taiwan, and to not pressure Taipei to enter into negotiations with the People’s Republic of China.

Most Asia analysts assume that if China took unprovoked military action to unify China, the United States would likely intervene militarily. Though Beijing-Taipei cross-straits relations are relatively smooth now, post-2016 elections in Taiwan could well see tensions rise and Taiwan become a source of friction in U.S.-China relations.  However, if Taiwan provoked Beijing by formally declaring independence, there is a good chance that the United States would not respond. Since the TRA was passed, the ambiguity in the U.S.-Taiwan security relationship has been a factor reinforcing stability.

Even Saudi suggestions it may go nuclear if Iran has a Taiwan precedent. On two previous occasions in the 1970s and 1980s, the United States detected secret Taiwan efforts to build nuclear capabilities. The United States in effect, forced a choice: U.S.-Taiwan security ties or strategic independence. Any enhanced U.S.-GCC security relationship should have clear understandings about the impact of Saudi/GCC nuclear proliferation on U.S. security obligations to the region.

Of course, the situation concerning the GCC is very different. But the Taiwan example may be helpful in crafting stronger assurances to the GCC than are currently the case. Perhaps some Congressional mandate to help the GCC defend itself and a U.S. commitment to view with “grave concern” any outside aggression against a GCC state could help better reassure our strategic partners.

After Obama’s “redline” fiasco vis-à-vis Syria and Gulf paranoia about U.S.-Iran reconciliation, the administration desperately needs a creative approach to enhance its security relationship with GCC nations, bilaterally or collectively. Drawing lessons for our experience with Taiwan is not a bad place to start.

Robert A. Manning is a senior fellow of the Brent Scowcroft Center for International Security at the Atlantic Council and its Strategic Foresight Initiative. He served as a senior counselor to the UnderSecretary of State for Global Affairs from 2001 to 2004, as a member of the US Department of State Policy Planning Staff from 2004 to 2008, and on the National Intelligence Council (NIC) Strategic Futures Group, 2008-2012 tweet: @RManning4 An earlier version of this article appeared on the Atlantic Council website, MENASource.