The Hard Truth About THAAD, South Korea and China 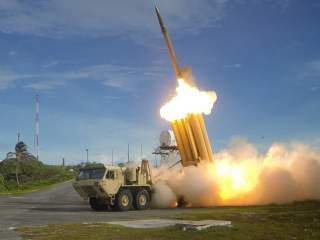 In the wake of North Korea’s nuclear test in January and its satellite launch in February, South Korea has shown a new level of interest in the topic of ballistic missile defense. Seoul officials are discussing with their U.S. counterparts the possibility of deploying a Terminal High Altitude Area Defence (THAAD) system in South Korea. South Korea already has short-range Patriot missiles, but THAAD would provide a second, longer-range, top-tier layer to the country’s ballistic-missile interception capabilities. Not everyone’s happy about it. Beijing has made plain its opposition to any such deployment. And there are questions over just how much difference THAAD would make to South Korea’s security.

Two misperceptions seem to have crept into the media debate on this topic, however. Some argue, for example, that THAAD is optimized for interception of medium- and intermediate-range missiles and is “of little or no use” against short-range missiles. They use that argument to support a second: that deployment of a THAAD battery and its associated radar in South Korea is actually a move that advantages the United States against China, rather than South Korea against North Korea.

Let’s start with THAAD’s abilities. Its manufacturer describes it as a “capability to defend against short and medium ranged ballistic missiles.” And a quick look at the THAAD flight test results shows that the bulk of its testing has been against short-range targets. Here’s a video of the November 2015 test in which THAAD intercepts both a short-range missile and a medium-range one. By contrast, it’s largely unproven against longer-range threats such as intermediate-range ballistic missiles. In essence, then, THAAD is quite capable of intercepting short-range missiles: indeed, its mobile radar, the AN/TPY-2, can provide end-to-end coverage of short-range missile flights, enhancing the prospects for successful interception.

True, the South Koreans have already committed to upgrade their Patriot-2s to PAC-3s. That’s been in train since early 2015 and might take a year or two to unfold. So their missile defense capabilities are already getting better. But Patriot’s a point-defense system; THAAD adds both another layer and a larger footprint to the Patriot system. Both systems could still easily be swamped, of course, as interceptor numbers remain limited.

Second, let’s turn to the U.S.–China issue. China worries primarily about the system’s surveillance capabilities. It’s not concerned that a THAAD missile battery in South Korea could intercept a Chinese strategic missile bound for continental America—that’s not a realistic scenario. Rather, it’s concerned that THAAD’s radar might be able to offer early tracking data to other parts of the U.S. ballistic missile defense system—in particular to the Ground Based Interceptors responsible for defending the U.S. homeland—thus degrading China’s ability to target the United States.

Its anxiety is a classic case of a security trilemma, where actions taken by one country in response to the actions of another—here the deployment of enhanced U.S. BMD capabilities to offset North Korea’s growing missile capabilities—complicate relations with a third player. Still, China’s scarcely the first country to feel threatened by a ballistic missile defense radar. Russia worked itself into a tizzy—not entirely without cause—when George W. Bush’s administration proposed deploying a X-band radar in Europe to support a regional ballistic missile defense system against Iran.

China’s right to believe that THAAD surveillance data could be transferred to other BMD assets protecting CONUS. Indeed, one of THAAD’s missions would be to strengthen U.S. defenses against the possibility of North Korean ballistic missile attack on CONUS. So it has to be able to transfer data to CONUS-based radars and interceptors. But the United States already has a THAAD battery deployed on Guam, two AN/TPY-2 radars deployed in Japan (at Shariki and Kyogamisaki), space-based assets, plus a range of ship-borne radars and larger land-based radars in other parts of the Pacific theatre. Would a THAAD deployment in South Korea change much? The short answer is that it could improve early tracking of some Chinese missiles, depending on their launch point. Still, that might not make actual interception of those missiles much easier. ICBM warheads move fast. And sophisticated penetration-aids help to confuse missile defenses.

On the other side of the ledger, there’s a substantive gain to South Korea from deployment of an AN/TPY-2 radar in country: without its radar the THAAD system won’t intercept anything. True, even with its radar THAAD won’t make South Korea invulnerable; Kim Jong-un has other options for attack. Overall, though, there’s an upside for South Korea in THAAD deployment. The case becomes more compelling the more Kim Jong-un relies on his nuclear and missile forces as his conventional forces deteriorate.