The History of Fake News in the United States 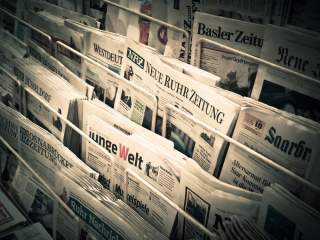 A petition message to the legislative body concluded: “As long as there exists in France parties hostile to the Empire, liberty of the press is out of the question, and the country at large has no wish for it.”

Though President Trump has caused concern by calling members of the press “enemies of the people,” his threats against the press come through mockery and rebuke rather than official sanctions. Presidential media hating has been around since George Washington was in office, but there have been few serious proposals to actually crack down on reporting.

By contrast, the press is treated quite differently in France, where citizens are placed on a 44-hour legal media blackout on the eve of elections. As USA Today reported, in the days leading up to the French presidential election, the media were warned not to report on data leaks from candidate Emmanuel Macron’s campaign. The French election commission said that the leaks likely contained some fraudulent data, i.e. “fake news,” and any reporting on it or even passing it along on social media could lead to criminal charges.

Jim Swift of The Weekly Standard pointed out the obvious: “This is censorship, plain and simple. In the Internet Age, reporters and citizens around the globe can share information—be it about the Macron hack or not—on Twitter, Facebook, or on their websites. The French press and citizenry? Repressed.”

But The New York Times praised the reporting ban, and emphasized the benefits of the centralized French system over the more freewheeling ones in Britain and the United States. In a recent article, The Times noted:

The contrast may have been amplified further by the absence of a French equivalent to the thriving tabloid culture in Britain or the robust right-wing broadcast media in the United States, where the Clinton hacking attack generated enormous negative coverage.

“We don’t have a Fox News in France,” said Johan Hufnagel, managing editor of the Left-wing daily Libération, according to The New York Times. “There’s no broadcaster with a wide audience and personalities who build this up and try to use it for their own agendas.”

A similar scandal occurred in the United States when Wikileaks published thousands of emails from the Democratic National Committee that cast the Clinton campaign in a negative light. Yet, there was no censorship of the information; the American people would not have stood for it.

Who has the better system? Since the adoption of the U.S. Constitution, France has gone through five republics, two empires, and four monarchies. Despite the bumptious nature of American politics and media, it would be foolish to bet on France’s fifth republic outlasting America’s first.

Americans have been lucky to have a decentralized media through most of their history and a culture that strongly embraces the idea of a truly free press. Those arrangements have had a long-lasting impact on American institutions and have made the country resistant to authoritarian impulses. However, in the mid-20th century, the American press became more centralized and the country opened its media sector to many of the same problems that had plagued European media.

Some glamorize the era in which a few television companies and big newspapers became media gatekeepers, similar to the model that currently exists in France. This nostalgia for “more responsible” journalism ignores the fact that some of the most egregious fake news blunders were perpetrated by an unchecked centralized press. Perhaps the worst offense of all came from The New York Times.

The New York Times and the Fraud of the Century

Today, a 30-foot-long bronze wall stands in Northwest Washington, D.C., and on this wall is the simple image of a wheat field. It is a monument to the victims of The Holodomor, a monstrous genocide committed by one of the most ruthless and authoritarian regimes in human history.

In 1932, Soviet dictator Joseph Stalin, frustrated that he could not crush Ukrainian nationalism, ordered that grain quotas for Ukrainian fields be raised so high that the peasants working the fields would not be left with enough food to feed themselves. NKVD troops collected the grain and watched over the populace to prevent them from leaving to find nourishment elsewhere.

As a result of these policies, as many as 7 million Ukrainians died of starvation in 1932 and 1933.

But while Stalin was conducting an atrocity with few equals in human history, The New York Times was reporting on the regime’s triumphs of modernization.

Walter Duranty, the Times Moscow bureau chief, won the 1932 Pulitzer Prize for Correspondence for his 1931 series of articles on the Soviet Union. Pulitzer in hand, he proceeded to perpetrate perhaps the worst incident of fake news in American media history at a time when Americans relied on the Times and a handful of other large media outlets to bring them news from around the world.

Duranty’s motivation for covering up the crimes taking place in Ukraine has never been fully ascertained. However, it undoubtedly gave the Bolshevik sympathizer better access to Stalin’s regime, which routinely fed him propaganda.

While privately admitting that many Ukrainians had starved to death, Duranty sent numerous reports back to the United States praising the good work of the Soviet government. He reported that there had been some deaths from “diseases due to malnutrition,” but called the suggestion that a widespread famine was taking place “malignant propaganda.”

These reports were highly influential in the United States and had enormous impact on U.S.-Soviet relations. Historian Robert Conquest wrote in his book, “The Harvest of Sorrow: Soviet Collectivization and the Terror-Famine”, that due to the perceived credibility of The New York Times, the American people accepted the fraudulent accounts as true.

Sally J. Taylor wrote in her book “Stalin’s Apologist” that Duranty’s reports helped convince President Franklin D. Roosevelt to extend official diplomatic recognition to the Soviet government in November of 1933. She wrote: “[A]lmost single-handedly did Duranty aid and abet one of the world’s most prolific mass murderers, knowing all the while what was going on but refraining from saying precisely what he knew to be true.”

Though Duranty’s reporting was a lie, The New York Times never questioned its authenticity and dismissed charges that their reporter was cooking up false reports. Famed British journalist Malcolm Muggeridge wrote of this willful self-deception in his autobiography:

If the New York Times went on all those years giving great prominence to Duranty’s messages, building him and them up when they were so evidently nonsensically untrue […] this was not, we may be sure, because the Times was deceived. Rather it wanted to be so deceived, and Duranty provided the requisite deception material.

In the more centralized national media landscape of the mid-20th century, a fraudulent story like that published in the Times was both more likely to be believed and less likely to be debunked.

The Truth Cannot Be Centrally Planned

But America’s evolving media landscape is again moving toward decentralization. And, fortunately, the First Amendment is a mighty weapon against the suffocating and stultifying suppression of speech that frequently occurs in other nations.

The system the Founders created and intended for the United States was one that they hoped would lead our civilization to the truth. We have acquiesced to the fact that there will always be a great deal that the smartest and the wisest simply don’t know. No earthly, impartial arbiter has the capacity, or should have the capacity, to determine absolute fact for us—especially in the realm of politics, philosophy, and man’s relation to man.

For all the uncertainty and chaos that an unfettered media seem to engender, Americans have been best at ultimately veering closer to the truth than any other people. The First Amendment is one of the greatest of many gifts the Founding generation bequeathed us and has been a truly defining feature of American exceptionalism with few comparisons around the globe.

Through all the angst over fake news, fraudulent journalists, and media hyperbole, the American republic will survive. In the end, fake news peddlers will only damage their own reputations and bring doubt on their reporting. Fortunately, our freedom isn’t dependent on the musings of the White House press corps. It hinges on the Constitution and the liberty it was created to protect.