The Hunt for the Next Red October: Russia's Lethal New Subs 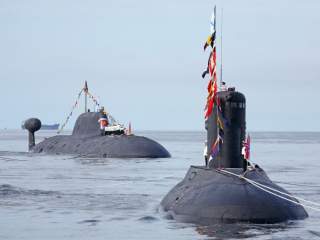 Though the Project 705 Lira-class attack submarine—better known in the West as the Alfa-class—is perhaps most famous for starring as the main antagonist in the movie The Hunt for Red October, the ill-fated boats have left an outsized legacy independent of the silver screen. That’s because Moscow’s future submarine fleet will be far more automated than current designs—continuing a trend that was pioneered in the late 1970s by the Soviet Union’s Project 705 Lira-class attack boats.

While the Alfa-class boats were in many ways an unsuccessful experiment, the fast titanium-hulled submarines pioneered many innovative technologies. Their strong hulls gave them tremendous speed—close to 45 knots according to some sources—and they could dive to impressive depths. Indeed, the Liras had a never-exceed depth of around 3,900ft, but operationally rarely exceeded 2,000ft. Moreover, the submarines were relatively tiny—displacing only 3,200-tons submerged.

Other than the titanium hull—which was a huge innovation for the time—the Lira-class boats featured two other innovations. One was a very compact liquid-metal cooled reactor, which could generate enormous amounts of power. In all, two types of lead-bismuth cooled fast reactors were used on the Lira—the OK-550 and BM-40. Both reactors produced about 155-MW of power giving the boat more than 40,000shp. The result was blistering speed and acceleration—but at the price of being extremely noisy (though the boats had a pair of 100kW electrical propellers for low speed tactical maneuvering).

The other major innovation introduced by the Lira-class was automation. Because the Soviet wanted a small, fast interceptor submarine, a small crew-size was mandatory. The Soviets did manage to reduce the crew-size to about thirty-two officers, but no enlisted crew. Ultimately, however, the Lira-class was a technological bridge too far—safety was a major concern. “We spent twenty years using the Lira (Project 705) subs during the 1970s through 1990s. . . . It was a very promising project but it was eventually shelved due to the abundance of new technological ideas simultaneously implemented in one boat,” Lenta.ru quoted an unnamed defense source, according to state-owned Sputnik.

But while the Lira was a failure, the technology from those boats paved the way for the later Sierra (Project 945) and Akula-classes (Project 971Shchuka-B), and ultimately the Project-885 Yasen-class (Severodvinsk-class submarine). Indeed, compared to U.S. Navy submarines, the Russian submarines have a very small crew-size. The Yasen-class only carries ninety crew members while future Russian nuclear submarines such the new “interceptor” and “SSGN” designs that are currently in the works will have fewer still. “The crew of such a sub could be down to 50 or 55 people and could ultimately be reduced to between 30 and 40,” the source told Lenta.ru.

Of course, given Russia’s economic conditions, it is hard to say when those new submarines will materialize—if they ever do.