The Hyper Velocity Projectile: How the Navy Could Fire 5,600 MPH 'Bullets' at Missiles 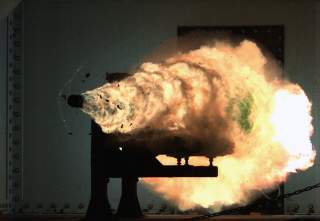 The Pentagon is pursuing an innovation missile-defense system that could address some of the shortcomings of the existing systems it deploys.

There are a number of major (somewhat interrelated) obstacles to defending against a missile attack. The first is simply the sheer technological challenge of using a missile to destroy another fast-moving missile. This is sometimes compared to trying to shoot a bullet with another bullet. The other is the cost equation: because of the technological challenges involved, missile-defense interceptors are inherently more expensive than the offensive missiles they are trying to destroy. Furthermore, because of the extreme difficulty of shooting down a missile, numerous interceptors are usually used against a single missile. All of this means that an adversary can merely use more offensive missiles to overcome defensive systems, especially when they know how many interceptors they are up against. This is easy to do when the interceptors cost so much compared to the missiles they are trying to destroy.

Enter the Hyper Velocity Projectile. Developed by the Pentagon’s Strategic Capabilities Office (SCO), the program aims to use the U.S. Army’s existing 155-millimeter howitzers to fire the new Hyper Velocity Projectile (HVP). These projectiles will have speeds of 5,600 miles per hour and only cost $86,000, compared to about $3 million for the interceptors of existing high-level missile defense systems like the Patriot.

Vincent Sabio, the program manager of the Hyper Velocity Gun Weapon System (HGWS) at SCO, discussed the project at an event on January 25 at the Center for Strategic and International Studies (CSIS), a Washington, DC think tank. “That projectile has been independently costed—not by me, I wouldn’t expect to you believe my costing — but . . . by Navy IWS [Integrated Warfare Systems] at about $85,000 a round,” Sabio said, according to a report by Breaking Defense. “You can shoot a lot of those things and not feel badly about it.”

Indeed, as Sydney J. Freedberg Jr., the Breaking Defense reporter, noted in the article, at the $86,000 price tag the Army could purchase thirty-five HVPs for the same cost as a single Patriot interceptor. And, as Freedberg went on to point out, even if each HVP had only a 10 percent chance of hitting its target, using twenty-two of them against a missile would give the Army a 90 percent chance of successfully intercepting it.

The U.S. Army howitzers are uniquely suited to firing this many rounds in the short time that a missile would be airborne. As Kyle Mizokami points out, “a typical six-to-eight-gun field artillery battery could fire up to two dozen rounds in 15 seconds.” And since the U.S. Army already has hundreds of howitzers, it wouldn’t have to purchase a bunch of new launchers to take advantage of the HVP.

Sabio pointed out other advantages of the HGWS. Namely, the current missile defense systems are all large, have limited mobility, and are easy for adversaries to detect and track. “As a result, the adversary is able to count interceptors; they know where our sites are; and they can simply play what we call the plus-one game,” Sabio noted at the CSIS event. “They know if you have x number of interceptors, the absolute most they need to throw at you is x threats. And once you have fired your x interceptors, they pretty much own you.” The HGWS’s mobility, as well as being able to fire many cheap projectiles in such a short time period, would greatly complicate an adversary’s ability to out game America’s defenses.

Another advantage of the HGWS, according to Sabio, is that it will be able to deal with multiple different threats. “There may be different modes that it operates in and . . . we may tell it shortly after it comes out of the gun which type of a threat it is going after, and it will configure itself for that type of threat in terms of the dynamics—how does it maneuver, how does it close on the threat,” Sabio said, and National Defense magazine reported.

The Army will not be the only recipient of the HVPs, as the Navy is also expected to adopt them. Specifically, HVPs will be fired out of the five-inch (127-millimeter) Mark 45 deck guns on some of the Navy’s destroyers (cruisers also have the same deck gun). These guns can fire a maximum of twenty shots per minute. And, according to Kyle Mizokami, while a normal Mark 45 only has a range of fourteen miles, the HVPs will be able to reach targets at up to forty miles away.

Sabio said at the CSIS event that the Strategic Capabilities Office will spend another year refining the HVP and conducting further testing. It has asked Congress for $67 million in fiscal year 2018 for these efforts. After that, SCO will be handing off the capability to the Army and Navy, which will determine exactly how to integrate the new system into their operations.