The Iranian Threat to the U.S. Navy May Be Overblown 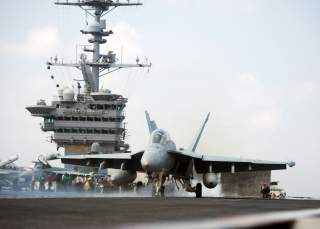 While it might be easy to discount such a lightweight force, the Islamic Revolutionary Guards Corps Naval Forces and the Islamic Republic of Iran Naval Forces have numbers on their side and the ability to mount complex, multidirectional attacks with antiship missiles against much larger foreign naval vessels.

Iran’s naval forces are some of the smallest but most aggressive in the region. Decades of sanctions and embargoes have strangled the navy’s attempts to modernize, leaving a smaller than expected naval force whose most intimidating features are homebrewed frigates, coastal missile batteries and swarms of fast, lightly armed fast-attack craft. Despite their size, the strategic importance of the Persian Gulf and its proximity to a major portion of the world’s oil supply mean that Iran’s naval forces have a great deal of say over global access to one of the most important waterways in the world.

Iran is historically a land power, relegating air power to a respectable second-place priority. Iranian sea power is traditionally third on the list of priorities, and the least important of all. Iran’s navy under the shah was modest: in 1976 the Imperial Iranian Navy had just four frigates with Sea Killer and Seacat guided missiles. These were backed up by twenty-five patrol boats, six minesweepers and a pair of landing craft. A naval air transport battalion operated thirty-five Bell helicopters capable of landing on oil rigs and the Persian Gulf’s many small islands.

The shah had plans to more than double the size of his navy. The navy would receive three ex-Tang-class submarines, four modified Spruance-class destroyers and twelve patrol boats with Exocet antiship cruise missiles. The sale of most, if not all, of this equipment was canceled after the shah was deposed and replaced with a theocratic government under the supreme leader Ayatollah Khomeini. Under the new regime, the Imperial Iranian Navy became the Islamic Republic of Iran Navy (IRIN.) The new regime was openly hostile to the United States and the West, and the sale of the submarines and destroyers (which went on to become the U.S Navy’s Kidd class) failed to go through.

The Iran-Iraq War of 1980 to 1988 was primarily a land and air war, and although the two countries shared a sea border, no significant naval battles were recorded. Instead of attacks from the sea, both countries preferred to launch attacks on seaborne targets from the air using bombs and missiles—particularly against the other side’s oil shipping and seaborne oil platforms.

One area where the Iranian Navy saw action was against the U.S. Navy in 1987–88. Iranian forces mined the Strait of Hormuz to disrupt oil shipping in the area, resulting in the guided-missile frigate USS Samuel B. Roberts sustaining damage from a mine. President Ronald Reagan ordered U.S. air and naval forces to conduct a punitive attack on Iranian naval assets in the region. Operation Praying Mantis saw the sinking of the patrol boat Joshan (armed with Harpoon missiles), the sinking of the frigate Sahand and the disabling of the frigate Salaban. Over a period of forty-eight hours, the U.S. Navy caused more damage to the Iranian Navy than Iraq had caused in eight years of war.

Western arms sanctions and embargos have constrained Iran’s ability to rebuild. Today, the IRGC Naval Forces maintain a fleet of ten Chinese-made Houdong coastal patrol boats, each armed with Ghader antiship missiles. According to the U.S. Navy’s Office of Naval Intelligence, the IRGC also has forty-six smaller Chinese and North Korean patrol ships with antiship missiles or torpedoes, and capable of speeds of up to forty or fifty knots. The IRGC still maintains a fleet of speedboats, or fast inshore attack craft armed with infantry support weapons and capable of laying mines.

The Islamic Republic Iranian Navy runs toward larger, more expensive and more capable ships, and has rebuilt more slowly. Even as late as 2007, the IRIN’s principal warships were three Vosper Mk. 5 frigates of the Alvand class. Built in the late 1960s and displacing only 1,100 tons, four ships were built, but one, Sahand, was destroyed during Operation Praying Mantis. Other ships included ten out of twelve Combattante II–class missile corvettes purchased before the war from France, and domestically manufactured copies, all equipped with Chinese Ying Ji C-802 antiship missiles. The Navy also controls three Kilo-class attack submarines purchased from Russia and fourteen North Korean Yono-class midget submarines, the same kind that sank the South Korean corvette Cheonan in 2010.

Over the last ten years IRIN has apparently enjoyed slightly better funding, adding eleven more missile ships armed with C-704 and C-802 missiles. The Navy has also commissioned two new Jamaran-class frigates, copies of the Vosper frigates that are armed with a seventy-six-millimeter gun, three twenty-millimeter and forty-millimeter cannon, Standard antiair missiles, torpedoes, and C-704 or C-802 missiles. Four more Jamarans are under construction, and seven Sina fast-attack craft are under construction to replace the Combattantes.

Iran’s long coastline, astride some of the most important waterways in the world, makes land-based antiship missiles a useful weapon. The country has batteries of C-802 missiles, as well as local variants Ghadir and Ghader, with ranges of 120, two hundred and three hundred kilometers, respectively. The Iranian Revolutionary Guard Aerospace Forces, which control most of the country’s ballistic missiles, tested antiship ballistic missiles capable of striking enemy warships at sea in March of this year. These missiles are believed to have a range of thirty kilometers and the ability to home in on enemy radars.

The IRIN and the IRGC have separate responsibilities. The IRGC is responsible for defending Iran and controlling naval operations west of the Strait of Hormuz, while the IRIN is responsible for operation east of the strait and beyond. A zone of shared responsibility exists directly at the strait, within the vicinity of the coastal city of Bandar Abbas. Most countries would maintain a single naval force to patrol all of Iran’s southern waterways, and maintaining two separate naval forces is unnecessarily bureaucratic. That said, the IRGC is a deeply influential arm of the modern Iranian government and cannot simply be wished away.

Iran’s naval forces constitute a key part of the country’s defense. They are also likely active in Iran’s support of Yemen’s Houthi rebels, but the extent of such support is unknown. While it might be easy to discount such a lightweight force, the Islamic Revolutionary Guards Corps Naval Forces and the Islamic Republic of Iran Naval Forces have numbers on their side and the ability to mount complex, multidirectional attacks with antiship missiles against much larger foreign naval vessels. They are a small, but potent, threat to any foreign navy that might stand in their way.

This article originally appeared in October 2017.