The ISIS Campaign: The War No One in Washington Wants to Talk About 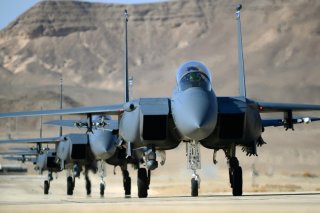 As Australia prepares to expand its air war against the Islamic State (ISIS) to Syria, it’s interesting to note that the first anniversary of the beginning of the bombing campaign against ISIS has passed virtually unnoticed in Washington.

This is quite incredible given that by August 31, 2015 the air war alone had cost the U.S. treasury well over U.S.$3 billion, or about US$9.4 million per day. Since the beginning of the bombing, there have been almost 20,000 bombs and missiles dropped by American and coalition aircraft for an estimated 15,000 ISIS fighters killed. That success rate is poor and has come at great expense. And it would appear that ISIS is able to replace its losses with new foreign recruits quite easily.

The lack of public interest in this war is even more extraordinary given that all the top military leaders have admitted that this will be a very long fight indeed. This is a war that the next two administrations will likely have to deal with. For example, General Martin Dempsey, the Chairman of the Joint Chiefs of Staff, has stated that the war against ISIS is a “generational conflict.” And General Ray Odierno, the Army’s out-going Chief of Staff, has echoed these sentiments by stating that “ISIS is a 10 to 20 year problem; it’s not a two year problem.”

Of course, no one wants to talk about long wars or wars that have impossible goals, such as the “ultimate destruction of ISIS.” President Obama certainly doesn’t want to, as he wants to be seen as the president who ends wars. And Senators and Congressmen are reluctant to do so because it would force them to take a policy position on the issue in an already highly divided political environment. In any case, the policy-makers in Washington can’t even agree as to whether this is a ‘war’, an ‘armed conflict’, ‘hostilities’ or ‘counter-terrorism’.

Needless to say, allegations that the U.S. Central Command—the military headquarters overseeing the campaign in Iraq and Syria—may have put a rosy picture on a recent intelligence report about the U.S.-led campaign will not help matters. However, it hasn’t taken a dodgy dossier (one gets a sense of déjà vu) for policymakers to conclude that the war is not going so well. And the tide of the war is unlikely to change in the near future, certainly not as long as the U.S. doesn’t send ground troops into the theatre.

And while everyone knows that wars aren’t won from the air only, there’s absolutely no appetite to yet again put boots on the ground in Iraq. I suspect the 3,500 U.S. troops already deployed to Iraq as part of Operation Inherent Resolve won’t be topped up very soon.

Neither the Obama administration nor the generals are talking of sending more troops. And except for Senator Lindsey Graham, who has called for the deployment of at least 10,000 ground troops, none of the candidates for the Republican presidential nomination has advocated sending more troops either. Everyone agrees on both sides of politics that this war is a political minefield. And this explains the congressmen’s deep reluctance to even talk about it on the floor of Congress.

Nevertheless, leading the crusade to have this war debated in Congress is Democratic Senator Tim Kaine. He’s also a lone voice. He firmly believes—and correctly so—that the power to declare war rests with Congress alone (by way of Article 1 of the Constitution). Moreover, he argues that the White House’s use of the 2001 Authorization for Use of Military Force (AUMF) is ridiculous. Essentially, this act authorizes the president to use force against the terrorists who were involved in the 9/11 attacks. Not only was ISIS not around in 2001, but it’s also a bitter enemy of al-Qaeda.

The Obama administration did put forward a draft text for an AUMF against ISIS—six months after the military operations had already started—but it has severe limitations to it which the Republican-dominated Congress isn’t keen to debate. And they don’t want to tie the hands of a potential future Republican administration. Accordingly, and despite General Joseph Dunford—the next Chairman of the Joint Chiefs of Staff—urging that Congress pass a new AUMF, only 90 minutes have been spent on debating that draft bill.

So all in all, the war against ISIS isn’t making much headway. But perhaps President Obama's latest attempt to convince Saudi Arabia's King Salman to commit more resources to the war effort will prove successful. This would help him regain some of the domestic political capital he lost with the Iran deal. And it would placate—somewhat and temporarily—the critics of his Middle East policy.