The Israeli Military May Soon Allow Women to Fight in Tanks 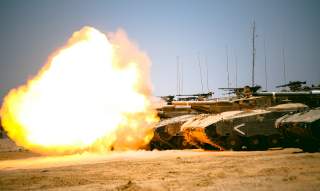 Israel has begun an experimental program to see whether women should be allowed to fight in tanks.

The move comes as Russia has decided to allow women to pilot military jets, and the U.S. Marine Corps graduated its first female armor officer in April.

The Israeli project is using female soldiers who just finished their basic training. “For the past two weeks, 15 women have been participating in the program, testing their ability to operate tanks, including lifting shells, loading them, driving and firing,” an Israeli military spokesman told the Jerusalem Post earlier this month.

“The focus of the program is to examine the physical abilities of these troops who are divided into teams, each led by a male soldier in command of a Merkava Mark III tank – the most numerous model in front-line service,” the Post said. “Throughout all phases of the program, the women will be accompanied by experienced tank commanders, doctors, nutritionists and fitness experts.”

However, the Israel Defense Force test is also notable because of what it is not. Rather than mixed-gender crews,  the tanks will be operated by female-only crews. The IDF has also said that the female-only tanks will not be committed directly into combat zones, but rather will be used for border security.

Why is the IDF considering women as tankers? The answer is not feminism but desperation. “The Armored Corps, in recent years, has become one of the least popular units for recruits because it is said to have the worst service conditions and fewer weekends off than other corps,” the Post pointed out.

Already the project has drawn fire. A former top Israeli commander says female tankers “would undermine in a very dangerous way the delicate and sensitive balance in an already volatile area of the IDF.” Much of that volatility is coming from ultra-Orthodox soldiers who object to serving alongside women.

“If we put two people into a closed box, there’s no way something won’t happen,” warns former IDF chief rabbi Yisrael Weiss. “We can’t put a couple, a man and a woman, a male soldier and a female soldier, into a closed box for a week and expect that nothing will happen. You’ll get a little tank soldier in another nine months.”

Israel is unusual in that women as well as men are subject to the draft, though about 50 percent of women qualify for exemptions on grounds such as religious belief, while about 25 percent of men get the same exemption. Women have long been employed in support roles, such as training snipers—even when women themselves are not employed as combat snipers. The Israeli Air Force graduated its first female fighter pilot in 2001.

The IDF already has women in combat units, notably the Caracal infantry battalion. But unlike regular tank crews or the women in the pilot project, Caracal is a co-ed unit where women serve in combat alongside men.

For the United States, the issue about women tankers isn't so much religious belief as in Israel, though some of the opposition does seem to be rooted in American conservative dogma that a woman's place isn't in the turret. But for both the United States and Israel, the real question will boil down to how well women can do the job. Though tankers get to ride rather than walk to work, it's still a physically demanding job to change a broken track or load shells. And, as the IDF rabbi pointed out, it is putting young men and women into a confined space—though not a very romantic one.