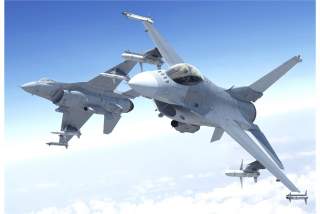 The Slovak Republic has requested the sale of 14 advanced Lockheed Martin F-16V Block 70/72 Fighting Falcon fighters to replace its increasingly obsolete fleet of Soviet-built Mikoyan MiG-29 Fulcrums. The new jets would give the Slovak air force a huge boost in capability with the addition of advanced new sensors such as an active electronically scanned array (AESA) radar and other capabilities that are not found onboard the Cold War-era Fulcrums.

“The State Department has made a determination approving a possible Foreign Military Sale to Slovakia of F-16 Block 70/72 V configuration aircraft for an estimated cost of $2.91 billion,” the U.S. State Department said in a statement. “The Defense Security Cooperation Agency delivered the required certification notifying Congress of this possible sale on April 3, 2018.”

The Slovak aircraft will be the most advanced version of the F-16 to be built to date and includes the Northrop Grumman AN/APG-83 Scalable Agile Beam Radar (SABR), which is an advanced AESA radar based on technology from the F-35. The Slovaks are also requesting the sale of advanced air-to-air missiles including 30 Raytheon AIM-120C-7 AMRAAM missiles and 100 AIM-9X Sidewinders, which offer considerable boost over the MiG-29’s capabilities—especially at long range.

However, the most significant improvement comes with the F-16’s excellent air-to-ground strike capability. Whereas the MiG-29 lacks any sort of real precision strike capability—or really any meaningful strike capability at all—the F-16 excels in that role and carries a huge variety of weapons. Along with the 14 jets, the Slovaks are purchasing six AN/AAQ-33 Sniper targeting pods and host of laser-guided and GPS-guided precision guided weapons.

The United States considers the sale of the F-16 to Slovakia to be a net security benefit to both NATO and Washington’s interests. “This proposed sale will support the foreign policy and national security of the United States by helping to improve the security of a NATO partner that is an important force for ensuring peace and stability in Europe,” the State Department said. “The proposed sale will support Slovakia’s needs for its own self-defense and support NATO defense goals.  Slovakia intends to use these F-16s to modernize its Air Force and strengthen its homeland defense.”

Another unstated benefit for the United States and Lockheed Martin is that F-16 operators will automatically gravitate towards the U.S. Air Force and adopt its tactics and procedures. Thus, there is a much greater chance that Slovakia could one day become a customer for the F-35 Joint Strike Fighter. However, that day is a long way off.