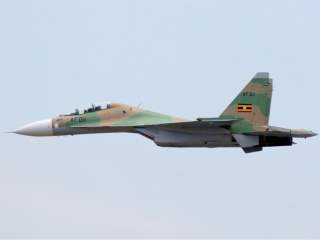 Of the world’s inhabited continents, Africa has by no means the biggest defense sector. Fifty-four African states are responsible for less than three percent—or about $50 billion—of the world’s military expenditure. But the continent also has experienced the largest increase in military spending, an astronomical 90 percent since 2005.

This by itself isn’t surprising. Conflict in a number of North and Sahelian African countries, and a boom in commodity prices in the years after the financial crisis, swelled the war chests of many resource-dependent governments in the region.

But what happens if you mix some real incentives to bulk up your military with a lot of money and support from external donors like the United States to some of the most authoritarian and secretive governments in the world? You get a lot of corruption, according to the international watchdog group Transparency International.

In its recently published Government Defense Anti-Corruption Index, Transparency International identified Africa as the continent with the highest average risk of experiencing corrupt practices in the defense sector. Of forty-seven countries surveyed, only seven score high enough to be in the Index’s “D Band,” indicating a high risk of corruption. The others are distributed evenly over the “E” and “F” Bands, signifying a very high and critical corruption risk, respectively.

“Defense corruption is leading to insecurity and instability on the African continent,” Gossaye said. “It weakens the institutional capacity and effectiveness of the armed forces and it repurposes these forces for commercial and predatory ends.”

Transparency International published a report alongside the index, which lists a wealth of examples illustrating these problems. The Republic of the Congo, for example, purchased two secondhand and outdated French Mirage fighter jets in 2011, despite its air force having “ceased to exist as a military fighting unit,” according to international experts. Consequently these jets are only flown during military parades and don’t enhance the country’s security in any discernible way.

Uganda invested in more modern Russian Su-30 jets and has actually used these in its recent intervention in South Sudan. But Transparency International states the military spent $740 million on six copies of the plane, which is more than double what the hardware should have cost. Uganda’s legislature wasn’t consulted on the deal and Transparency International couldn’t find any indication for a competitive bidding process. Some of the excess money is said to have ended up in political campaigning for the ruling party, presumably after those who arranged the deal received kickbacks from the Russian sellers.

While these examples do a good job of demonstrating the realities of defense spending in many African countries, the index itself is actually based on a much more rigorous and objective analysis, Gossaye said.

“We hire local researchers to collect information on seventy-seven questions, on which governments are scored from zero to four points,” he explained. “These reports are quality-checked by us and peer-reviewed by international experts. We also give governments the opportunity to comment, in case information on a question isn’t available in the public domain. If a government provides additional information which we can verify, we include it in the index.”

Gossaye points out that while all surveyed African countries scored quite badly, individual countries have different challenges. Where one country, like for example Nigeria, has highly irregular procurement processes, others have had their militaries effectively take over large parts of their economies through shell companies or official holdings.

But there are also general trends which affect most African countries.

“There is this sense of defense exceptionalism,” Gossaye said. While many governments have oversight mechanisms like an auditor general which do a fine job on other aspects of governance, an aura of secrecy and national security thinking surrounds questions of military spending. Generals are rarely challenged when they make demands, military budgets are only provided as aggregated numbers, if at all, and auditors stay clear of the Ministry of Defense.

This mindset sometimes leads to outright strange behavior, like when the speaker of Ghana’s parliament—a stable democracy with few serious threats to its external or internal security—cautioned a legislator who dared to question high military spending on contractors providing food and medical equipment. National security, it seems, extends to price of ready-made meals.

In the worst cases, the military. . . is the government. In Egypt, the government and military are virtually indistinguishable, and according to Gossaye, the Egyptian military is by far the biggest actor in the country’s economy.

The situation is similar in Eritrea and increasingly so in Ethiopia. The danger, Gossaye says, is that once the military has established itself as an integral player in a country’s economy, it becomes independent of any attempt to control it through budgetary means, essentially allowing it to set its own political agenda based on military and economic firepower.

Donor countries like the United States are not always helping matters, either. Competition between arms exporters leads Western diplomats to advocate for nonsensical procurements, the report states. Cameroon for example imported arms from both France and Israel, which turned out to be incompatible. And France happily sells modern frigates and other high-tech gear to Morocco, thereby encouraging the kingdom’s arms race with neighboring Algeria (which is supplied mainly by Russia), despite the hardware having little actual strategic value.

But not all is doom and gloom. “There are also success stories from many countries across the continent,” Gossaye said.

Côte d’Ivoire established an anti-racketeering center in 2014, leading to the conviction of approximately one hundred soldiers for corruption-related offenses. Guinea introduced biometric identification of service members to combat payroll fraud. Through weeding out dead and “ghost” soldiers, the country reduced the assumed strength of its armed forces by a staggering 40 percent.

Donor countries can do their share by including comprehensive anti-corruption packages in cooperation deals, Gossaye said. He pointed to the example of Mali, where the U.S. invested “large amounts of money in the equipment and training of the armed forces. But they concentrated on only one unit, the paratroopers, commonly known as red berets.”

What the U.S. military and diplomats didn’t take into account is that the red berets were perceived by the rest of the army as part of the president’s patronage network, securing his power in exchange for preferential treatment. By siding with this unit, Washington exacerbated the tensions within the Malian armed forces, contributing to an eventual mutiny and coup d’etat in 2012 by a group of junior officers and enlisted troops.

While the red berets tried to mount a counter-coup, this attempt was defeated and the unit dissolved. Mali subsequently collapsed almost entirely, with France having to mount a military intervention with American assistance. Not only had large parts of earlier U.S. investment been eradicated by that point, it might even have contributed to increased insecurity and the risk of conflict.

Peter Dörrie is Africa correspondent for War is Boring, where this article first appeared.