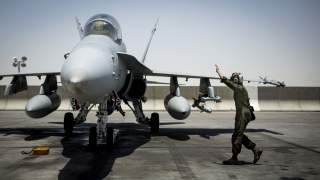 The United States Marine Corps’ fleet of Boeing F/A-18C/D model legacy Hornets has added a new weapon to their arsenal.

The venerable Hornet is now capable of employing BAE Systems’ Advanced Precision Kill Weapon System (APKWS)—a laser-guided 2.75-inch rocket—for the close air support role. The weapon is already operational onboard the Marines’ Boeing AV-8B Harrier II jump-jet and a host of rotary-wing platforms including the UH-1Y, AH-1Z and MH-60S/R. The weapon enables the Hornet to strike at more moving targets per aircraft than it could previously, a capability which is needed as the United States continues its wars in the Middle East.

“This is an incredible weapons system that our most experienced pilots down to the newest pilots can effectively employ,” Lt. Col Jon ‘TAG’ Curtis, commanding officer of an F/A-18 squadron, said in a statement.

Under the Navy’s “Speed to the Fleet” effort, NAVAIR developed “a land-based integration program to expedite fielding with a limited employment envelope using a tailored approach in engineering, logistics, and contracting to deliver units to theater as quickly as possible.”

As such, Curtis’ squadron—the first Hornet squadron equipped with the APKWS—received the new weapon in February and completed ground and in-flight training by April. Even with only a few weeks of operational experience, the pilots were hitting targets precisely. “All of the weapons fired during training directly impacted the final aim point,” NAVAIR said.

Though often overshadowed by newer and more capable platforms such as the Boeing F/A-18E/F Super Hornet and the Lockheed Martin F-35 Joint Strike Fighter, the legacy Hornet will likely be in service for years to come. The aircraft still forms the backbone of Marine Corps aviation and still an important part of the carrier air wing. New weapons, hardware and software are constantly being incorporated onto the venerable jet.

Indeed, NAVAIR is considering upgrading best of the remaining F/A-18C/D aircraft with new active electronically scanned array radars, replacing the existing APG-73 mechanically scanned array. “The AN/APG-73 is installed on F/A-18 C/D aircraft. The APG-73 has been subject to ongoing maintainability, supportability, and readiness issues. To alleviate these issues, the USMC is pursuing a replacement to the APG-73,” reads a FedBizOps solicitation. “Active Electronically Scanned Array (AESA) solutions are required due to the increased reliability and sustainability requirements as well as the associated capability improvements. In order to meet fleet readiness requirements, retrofit installations will begin in 4th Quarter 2020 and complete in 4th Quarter 2022, for fielding of a total of 98 systems (7 fleet squadrons retrofitted with 14 replacement radars each.”