The Master Plan: Could This Be China's Overseas Basing Strategy? 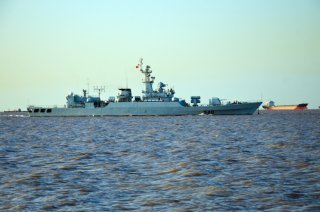 “Will China's growing global economic interests lead it to expand its overseas military presence and capabilities?” This is a question that has been asked by policymakers, academics and strategists since China's economic growth became dependent on its ability to access energy through maritime sea-lanes and overseas markets.

The common argument is that, as China continues to invest in developing markets and resource exporters such as South Sudan, and becomes more reliant on foreign oil and energy, primarily from producers in the Middle East, it will gradually seek to protect those interests with military forces. This would follow the pattern of other great powers throughout history, which have tended to extend a security presence to where their economic interests lie. The often heard “String of Pearls” theory which emerged out of a Booz Allen Hamilton report in 2004 follows this logic when it predicts that China, seeking to secure the flow of energy through the Indian Ocean, will use its “commercial and security relationships to establish a string of military facilities in South Asia.”

But some are asking if China is different.

A recent report from the Institute for National Strategic Studies, "Not an Idea We Have to Shun": Chinese Overseas Basing Requirements in the 21st Century, argues that, based on an understanding of China's “long-standing” foreign policy principles and goals, there is little evidence that it will pursue a “String of Pearls” strategy.

Far more likely is that Beijing will implement a “Dual Use Logistic Facility” strategy, in which overseas bases will provide “medical facilities, refrigerated storage space for fresh vegetables and fruit, rest and recreation sites, a communications station, and ship repair facilities.” This would entail a far leaner and less overt military and security presence than the “String of Pearls” theory or most other predictions about the future of PLA Navy overseas basing. The report states that:

Given China’s self-image as a champion of the developing world and a positive alternative to other global powers, it is highly unlikely to pursue models that involve large overseas military bases or extensive networks of facilities on the sovereign territory of other states. Beyond the rationale that China is unlikely to violate foreign policy principles that it has established as a foundation for its foreign and defense policy behavior, there is an even stronger reason that China will not establish these kinds of overseas bases. They would threaten China’s image as a peaceful rising power and could imperil China’s future economic growth, if the international community interprets such bases as evidence of malign Chinese long-term intentions.

It also seems that the PLA Navy is learning from the US Navy, which is well versed in overseas logistics, resupply and basing. Take this anecdote about how the PLAN has resupplied its anti-piracy task force operating in the Gulf of Aden these last six years:

PLAN ships visited Aden 10 times, making it one of the most frequently visited ports. However, only one type of PLAN ship has visited Aden: comprehensive supply ships. The supply ships replenish their food, water and diesel fuel and then provide replenishment-at-sea services to other ships in the PLAN Gulf of Aden Task Force. This operational pattern closely mirrors U.S. Navy operational patterns in the Persian Gulf, suggesting that the PLAN studied and applied U.S. naval concepts of operation. That the port of Aden also happens to have been the port in which the USS Cole was attacked by al Qaeda in 2000 is probably not lost on PLA Navy planners. Thus, the operational pattern of sending a single replenishment ship to Aden and having it replenish other ships not only mimics the U.S. pattern of behavior but is also a prudent force protection measure.

On the often-heard “String of Pearls” theory, the report makes a strong case that it is simply not taking place:

First, there is no evidence that the Chinese are currently conducting military activities at any of the String of Pearls sites. To date, PLAN Gulf of Aden task forces have not used or visited a single String of Pearls site. Second, transactions between the PLAN and host countries providing support for PLAN Gulf of Aden operations have been commercial in nature. These ports have only provided “hotel services,” replenished supplies, and served as liberty sites for visiting PLAN ships. Finally, the number of PLA forces and units involved in out of area activities has been very limited. None of this evidence supports assertions that the Chinese intend to deploy enough forces in the Indian Ocean to dominate the region or engage in major combat operations with any of its neighbors.

While this report is certainly good news for those that fear an Indian Ocean confrontation between an “encircled” India and China, tensions are still high and were most recently symbolized by the furor created from a pit-stop by a PLA Navy nuclear submarine in Colombo.

We must also remember, other great powers were once “different” too.