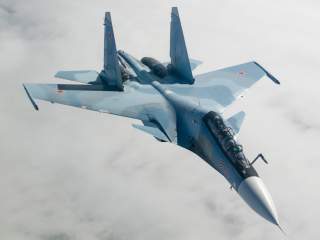 Iran looks set to sign a deal to purchase Russian-made Sukhoi Su-30 Flanker fighters as it upgrades its military forces following the nuclear deal, which cleared the way for sanctions to be lifted on Tehran. Iranian defense minister Brig. Gen. Hossein Dehghan is set to visit Moscow on February 16 to discuss the potential fighter buy, as well as to discuss deliveries of the Almaz-Antey S-300 air and missile defense system.

“Minister Dehgan will also discuss the delivery of Su-30 airplanes because the Defense Ministry believes the Iranian Air Force needs this type of plane. We’ve moved far in these discussions of purchases and I think that during the upcoming visit a contract will be signed,” an Iranian defense ministry source told the Russian state-run media outlet Sputnik.

Earlier, the Iranian Mehr News Agency had quoted Dehghan—who appeared on Iranian state TV—saying that Tehran needs to focus on modernizing its air force. To that end, Dehghan specifically cited the Su-30—but he did not indicate which version of Russian-built jet Tehran is interested in. “Today we need to pay attention to air force and aircraft and we seek to seal a deal with the Russians upon which we will have partnership in the construction and manufacturing of the jet fighter,” Dehghan said.

Presumably Iran would want one of the advanced variants similar to the aircraft operated by India, Malaysia, Algeria and Russia itself. However, it is also possible that Iran could opt for a variant of the more basic Su-30M2, which is also in service with the Russian Air Force. That variant is somewhat less expensive, which might make more sense considering Iran’s economic situation. Perhaps of note, Iran does not seem content with merely buying the Su-30; Tehran seems intent on license production of the aircraft.

The Su-30M2 variant, which is built in Komsomolsk-on-Amur in Russia’s far east, is missing the Su-30SM’s canards and thrust vectoring nozzles. It also has a less comprehensive avionics suite. Either way, the addition of any Su-30 variant would greatly increase the capabilities of the Iranian air force, which is mostly equipped with an antiquated mix of American-, Russian- and Chinese-built hardware.

The most advanced aircraft Iran currently has are a handful of American-built Grumman F-14A Tomcats and MiG-29s acquired either from the Soviet Union or aircraft that defected from Iraq. The rest of its arsenal is composed of geriatric F-4 Phantom IIs, locally modified F-5 Freedom Fighters and Chinese-build F-6 and F-7 aircraft—derivatives of the MiG-19 and the MiG-21 respectively. Most of Iran’s “indigenous” aircraft developments have been modifications to the Northrop F-5 airframe or ridiculous papier-mâché mockups like the Qaher-313 farce.