The Middle East's Worst Nightmare: A War between Israel and Russia 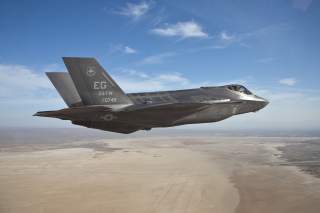 The news that Israel had attacked targets in Syria was a yawner. The Israeli Air Force has been regularly paying visits to Syria for years, attacking convoys transporting Iranian weapons to Hezbollah, or destroying a Syrian nuclear reactor in 2007.

But this time, Syrian media reported that Israel fired several surface-to-surface missiles at a military airport. Yet much more significant is that fact that the airport was located outside Damascus, probably at least twenty-five miles from the Israeli border.

If in fact the attack occurred—and Israel is neither confirming nor denying that it has—what does this mean?

For starters, a missile that can reach Damascus isn’t some tactical anti-tank rocket fired by the Israeli army at some Hezbollah or ISIS gunmen on the border. Most likely it was a stand-off missile, perhaps an air-launched Popeye or Delilah, or some top-secret guided weapon never before used. Presumably Jerusalem was not crazy enough to use a nuclear-capable Jericho ballistic missile.

But as Israeli military commentator Ron Ben-Yishai perceptively asks, why did Israel use missiles instead of the aircraft that it usually does? “Accurately dropping bombs is usually cheaper than firing surface missiles,” Ben-Yishai writes. “The cost of one accurate rocket is higher than the cost of accurate aerial munition, even when taking into account the cost of operating the plane and the pilot. It’s reasonable to assume, therefore, that if Israel did in fact use surface-to-surface missiles, as the Syrian media claimed, it had a good reason to do so.”

That good reason is Russian radar, Ben-Yishai believes. “Had Israel launched planes to carry out the mission, they would not have had to enter Syrian territory to hit the air base and could have simply flown over the sea or over Lebanese territory. But the sensitive and long-range radars, which the Russians brought to Syria when they entered the fray, would have been able to detect the presence of Israel Air Force planes in the area. It’s even possible that the Russians would have warned the Syrian antiaircraft batteries which, according to reports, have already tried to hit Israeli planes as they embarked on missions to stop Hezbollah from arming itself.”

Another reason could be the S-400, S-300 and SA-23 surface-to-air missiles that Russia has deployed in Syria, according to Ben-Yishai. The presence of advanced SAM batteries may deter Israeli aircraft from operating in Syrian airspace.

However, there is another possibility that Ben-Yishai doesn’t mention. That’s the potential of Israeli and Russian aircraft engaging in battle. Russian fighters have already confronted U.S. aircraft attacking ISIS in Syria. If Israeli planes were to accidentally bomb Russian troops, and Russian fighters and SAMs fired at them, and then Israeli called in more fighters to rescue their planes and knock out the SAMs . . . it could be a very, very bad day for all concerned.

The first two Israeli Air Force F-35s are headed from the United States to Israel right now. Will the presence of Russian aircraft and SAMs encourage Israel to use stealth aircraft in Syria, in turn provoking Russia to deploy even more sophisticated air defense weapons?

As is, the situation is ominous. The problem with Israel launching surface-to-surface missiles is that the region has become a parking lot for missiles and rockets of all types. As the Americans and Soviets learned during the Cold War, missile blips suddenly appearing on radar screens can make people nervous, especially for states like Israel and Iran that have—or may have—nuclear weapons.

Israel has also long believed, as with the strike on Saddam Hussein’s Osirak nuclear site, that it’s better to neutralize potential threats before they become actual threats. If Israeli intelligence should detect, for example, Iranian weapons of mass destruction being transported across Syria to Hezbollah in Lebanon, would Jerusalem sit on its hands? Or would it decide that destroying the threat is worth a potential confrontation with Russia?

One war is Syria is bad enough. We don’t need two.