The Midterm Results: "The political momentum in Washington clearly is with a resurgent Republican Party." 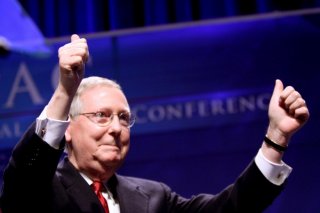 Power is supposed to be diffuse in American politics.  Especially at the federal level, the Framers of the U.S. Constitution were keen to avoid the monopolization of authority by any one party (or “faction”).  By designing a system that would tend towards power being apportioned between political actors rather than concentrated in one set of hands, the architects of the American government sought to entrench republicanism and limited government.

Yet the relentless diffusion of power is not without its problems.  Without a single locus of authority in the federal government, questions of accountability can arise.  In the words of Woodrow Wilson, who as a scholar found much to dislike with the operation of American government, “How is the schoolmaster, the nation, to know which boy needs the whipping?”  In other words, which parties or politicians should incur the public’s wrath when the federal government is failing?  Are national elections referenda on president’s party (or the majority party in Congress) or are they better seen as constellations of local contests, each with their own sets of issues, candidates, and meaning?

Last night, the Democrats lost control of the Senate in dramatic fashion, the American people handing majorities in both chambers of Congress to the Republican Party.  Both parties will attempt to frame the results to suit their own political ends.  Having portrayed the elections as a referendum on President Obama, the new Senate Majority Leader Mitch McConnell already has called the result a denunciation of “a government that people can no longer trust.”  The Democrats have been whipped; the Republicans have been favored.

During the election campaign, however, observers agreed that there was no unifying theme to bind together the disparate electoral contests taking place from coast to coast.  This was a Seinfeld election, they said; an election “about nothing.”  From this perspective, the Republican Party would be overstating the case to claim a mandate to govern.  While the Democrats probably will not push the point too far, it is nevertheless likely that the White House will minimize the wider significance of the GOP’s triumphs.  President Obama’s own mandate to govern is still current, they will insist.

Whatever the correct way to interpret the results—whether the nation was consciously admonishing the president’s party or simply venting frustration at politicians in general—the political momentum in Washington clearly is with a resurgent Republican Party.  The GOP has chalked up its largest majority in the House of Representatives since World War II; it has taken Senate seats from the Democrats in states such as Colorado, which twice voted for President Obama; and Republicans now occupy the governor’s mansion in supposedly blue states such as Maryland, Massachusetts and Obama’s own Illinois.  These are considerable gains.

But can these gains be sustained going forward?  Newt Gingrich perhaps put it best last night while providing commentary on CNN when he credited the elections with demonstrating that “campaigns matter, candidates matter, and—by the way—your vote matters.”  This was far from a vapid observation: yesterday’s elections proved that the modern Republican Party can win across the nation—including in some very unexpected locales—if it is equipped with the right messages and blessed with the right candidates and (Newt omitted to mention) the right timing.  These are important—and highly restrictive—qualifications, to be sure, but at least last night’s results should put paid to the commonplace notion that the Republican Party is in terminal decline, an embattled party with a shrinking membership, increasingly unable to garner votes from outside of its heartlands.

This is not to say that the Republicans will learn from the experience and elect to refine and update their message in future elections: anti-Obama campaigning can only unite an electoral coalition for so long and the GOP has struggled in recent years to rally behind a positive program for government.  Nor does it say anything about the quality of candidates that will emerge: a toxic Tea Partier would condemn the party to oblivion in 2016; the challenge for the party is to carve out a space for moderate politicians to adopt a leading role on the national stage.

Meanwhile, Democratic strategists should be worried.  What happened to their much vaunted “ground game” in states like Colorado and Illinois?  Why can’t the party poll well without President Obama on the ballot?  Is this simply a case of the familiar six-year itch or do these torrid election results point to some fundamental inadequacies with the Democratic coalition?  Are the Democrats about to be cast into the wilderness?  The party’s would-be nominees for 2016 have two years to put together their responses.

Until then, Americans will expect their leaders to work with the messy, overlapping electoral mandates that have been handed to them.  Important matters of domestic policy and foreign affairs hinge upon the White House and the Congress, Democrats and Republicans, being able to pool authority and govern in an effective manner.  The Framers intended that it would be this way; the American people have duly played their part.  All eyes are now on Washington.  Few, however, are holding their breath.