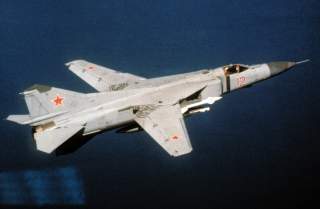 In the 1980s, the U.S. Air Force's secret 4477th Test and Evaluation Squadron evaluated a collection of captured or donated Soviet aircraft to determine their strengths and weaknesses.

On the whole, the expert test pilots were fond of the light, nimble and simple MiG-21. But not its successor. “The MiG-23 was a nightmare, maintenance was a nightmare. The guys hated flying it,” recalled a former 4477th squadron commander.

The MiG-23 was the 1970s fighter that the West loved to mock as junk. What could one expect from an aircraft that NATO gave the sadomasochistic name of Flogger?

With this year marking the fiftieth anniversary of the MiG-23’s first flight, it's worth asking: was the West's contempt justified? Or did the Flogger have the last laugh?

The MiG-23 began its life in the early 1960s. Impressed by America's new F-4 Phantom, the Soviet military asked the MiG design bureau to design a successor to the MiG-21 Fishbed, according to Yefim Gordon and Keith Dexter, writers of an authoritative history of the MiG-23. The new fighter was to be capable of achieving Mach 2.2, have a longer range than the MiG-21 and have a short takeoff and landing (STOL) capability to operate from rough airstrips. In return, Soviet commanders were willing to accept a less maneuverable aircraft.

Struggling to meet these requirements—especially the STOL part—MiG designers turned to a variable-geometry, or “swing-wing” design. They weren't the only ones: the 1960s and 1970s saw the introduction of the F-111, F-14, Tornado and B-1. Though offering the ability to configure an aircraft aerodynamics to meet various flight situations, such as takeoff and landing or low speed versus supersonic speed, the weight and complexity of variable-geometry wings soon made them a Cold War relic.

The MiG-23 first took flight in June 1967, and went into operational service in 1970. From 1967 to 1985, some 5,047 MiG-23s were manufactured, used by twenty-eight nations in Eastern Europe, the Middle East, Africa and Asia. The aircraft's equipment evolved over time, but standard models included a Sapfir-23 radar, TP-23 infrared sensor, a 23-millimeter cannon and four air-to-air missiles (two R-23 medium-range radar-guided missiles and two R-60 short-range heatseekers).

The Vietnam War made established the MiG-21’s reputation. It was the Arab-Israeli Wars that blackened the reputation of the MiG-23.  During air combat against Israeli F-15s and F-16s over Lebanon and Syria between 1982 and 1985, nearly a dozen Syrian MiG-23s were shot down. In Western eyes, the Flogger became a clumsy fighter that lacked the sophistication of Western designs.

Fast forward to today, and opinions of the MiG-23 are all over the spectrum. Former 4477th Squadron test pilots were afraid the engines would blow up or the aircraft would kill them. On the other hand, the Israelis evaluated a MiG-23 handed to them by an Arab defector, and concluded it had better acceleration than an F-16A. The Flogger is best characterized as a speeder rather than a dogfighter: in a NATO-Warsaw Pact war—the war that Soviet equipment was designed to fight—mass formations of MiG-23s would use their superb acceleration to zoom in, launch their air-to-air missiles and zoom away. MiG-23 fans also say that the aircraft exported to Soviet clients like Syria were “monkey models” lacking many capabilities that Soviet air force enjoyed, such as better radar and radar warning sensors.

Perhaps the last word should come from the Soviets themselves, who produced a manual for foreign pilots learning to fly the MiG-23.  The Soviets believed the MiG-23 had better climb rates and turning ability than the F-4 or F-16A at certain altitudes and speeds. However, “compared with the F-15A, the only advantage possessed by the MiG-23MLD was its ability to outclimb the Eagle in a zoom at speeds above 1,150km/h (715mph).”

The Soviets also considered the MiG-23s radar to be inferior to the F-15A's but equal to the F-16A's. “In conclusion, the manual stated that when armed with R-24 and R-60 missiles, the MiG-23MLD could hold its own against all the types of fighters considered,” Gordon and Dexter write. “If, however, it was pitted against F-15A, the MiG-23MLD only stood a chance of prevailing if several of them made simultaneous diving attacks from different directions and zoomed away once within visual range to return to the attack. This required experienced, skilled pilots and good ground control or AWACS backup. Great emphasis was placed on the initial attack phase and the importance of the element of surprise. It warned against head to head attacks against F-15As.”

The MiG-27 appeared in 1975, which was a ground-attack variant of the MiG-23. India used both models, and is retiring both models of what what it considers to be an accident-prone aircraft.