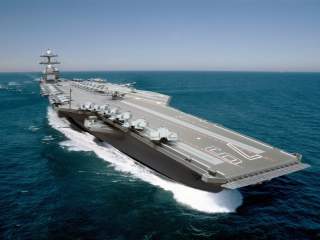 The U.S. Navy’s latest and greatest aircraft carrier, the USS Gerald Ford, when completed, will join the ranks of the world’s most advanced warships ever put to sea. It will carry an air wing with firepower second to none. It will be defended by some of the most powerful naval vessels on the planet. And yet, coming in at an astounding $15 billion dollars—the most expensive naval vessel ever—its time as the symbol of U.S. power projection and military dominance may be over.

Notice I used the words may be over. The simple fact is this: no one really knows for sure, but the trends all point to dangerous times ahead. We do know one thing with certainty—the mighty aircraft carrier is under siege, and without major changes to its capabilities, investing billions of scarce defense dollars seems a disastrous idea.

Several recent articles, from popular Web sites to more academically themed publications, all point to the same problem set. Countries with the technological means, specifically great powers like China and Russia—nations the Pentagon considers as the next big challenge for the U.S. military—are developing missile platforms that can strike from long-range and en masse from multiple domains. Such weapons (and this is where that tinge of doubt comes into play)—if accurate, using highly trained crews combined with the means to find their target on the vast open oceans—could turn America’s supercarriers into multi-billion dollar graveyards for thousands of U.S. sailors. While many of these weapons have never been fired in anger—some never even tested against a non-cooperative maritime target—the sheer proliferation of such weapons coming online all point to a crisis for America’s flattops.

Two recent articles only solidify this great challenge. First, in a stinging long-form op-ed for Politico, Jerry Hendrix, a Senior Fellow and the Director of the Defense Strategies and Assessments Program at the Center for a New American Security, fearing the challenges as described above, argues passionately for a change in the U.S. Navy’s long-term carrier plan. He notes that “the Navy’s decision on the carriers today will affect U.S. naval power for decades. These carriers are expected to be combat effective in 2065—over 150 years since the idea of an aircraft carrier was first conceived.” He also notes:

“. . . most weapons platforms are effective for only a limited time, an interval that gets shorter as history progresses. But until the past few years, the carrier had defied the odds, continuing to demonstrate America’s military might around the world without any challenge from our enemies. That period of grace may have ended as China and Russia are introducing new weapons—called “carrier killer” missiles—that cost $10 million to $20 million each and can target the U.S.’s multibillion-dollar carriers up to 900 miles from shore.”

This is where things get worse:

“At the same time, internal Navy decisions have cut the strike range of the carrier’s aircraft in half, to 496 miles. If we wanted to strike our enemies with these aircraft, the military would have to put the carriers well within range of those “carrier killer” missiles. It would be a mission fraught with physical danger to the ship and its crew.”

In a complementary piece for the more wonky World Politics Review, Mark Cancian, a former senior official in the Pentagon currently serving as a senior adviser with the CSIS International Security Program, makes very similar arguments as Hendrix, but with a twist. Cancian explains:

“Critics have increasingly asked whether carriers have become too vulnerable. No carrier has been seriously damaged by enemy action since WWII, but the future, as always, is uncertain. Carriers are built with many redundant and survivability features. Proponents note that during an accidental fire on the USS Forrestal in 1967, the ship withstood the equivalent of nine bomb explosions. On the other hand, weapons from highly sophisticated adversaries might be able to penetrate battle group defenses and put carriers out of action.”

The author continues, once again, echoing similar points made by Hendrix:

“Amid disputes over carriers’ usefulness, most observers agree that their aircraft are too short-ranged. During the 1980s, the average aircraft range was 900 miles. Now it is 500 miles and will not get any better with the introduction of the F-35. In permissive environments [think bombing ISIS], this is not a problem, because aircraft can be refueled to extend their range. In high-threat environments [like a war with China or Russia], however, refueling may not be possible.”

So what is the solution? In my view, carriers need strike-platforms that can attack land-based targets from long-range (think 1,500 miles or perhaps more—China’s new DF-26 anti-ship missile could have a range of 2,500 miles), fly remotely and utilize stealth to slip into areas that are protected by advanced air-defenses and anti-access battle-networks. This is a point Hendrix makes clear in his Politico piece. Sadly, this possibility seems all but dead thanks to the Pentagon’s recent decision to turn such an ongoing effort, the budding UCLASS program, into a remotely piloted refueling tanker. While the logic is plain to see—such a strike-platform as listed above may not be an easy thing to design, develop and deploy while increasing the available range of present carrier-based aircraft like the F-18 and F-35 is likely technologically simpler—such efforts cannot be abandoned just because they are difficult to field. As reports suggest, this new remotely piloted refueling plane will not even be stealthy. This is can only spell trouble, indeed, if a potential adversary were to focus their attacks on such refueling aircraft, America’s carrier’s would have to come much closer to enemy missile batteries—the very problem that must be mitigated.

Here’s an idea worth considering: why not field this refueling capability in the short-term and place resources into a stealthy, long-range, remotely piloted UCLASS-style platform as well? Yes, defense dollars are scarce. However, this might be the best solution for a complex, long-term problem.

While this debate surely plays out, let’s not be deceived by the headlines nor stick our heads in the sand. Just because Washington and its allies can pound away at ISIS, a terrorist group who does not have the means to fight back does not mean the carrier is safe from harm. I am afraid that if we don’t give America’s most expensive weapon of war the platforms it needs to strike from range, the aircraft carrier could join the battleships of yesteryear as floating museums sooner rather than later.

The carrier can be saved, but do we have the political will to do it?