The Most Important Weapon in Asia: The Next U.S. Anti-Ship Missile 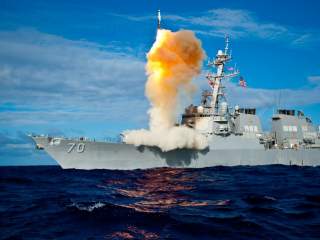 On February 4, U.S. Secretary of Defense Ash Carter announced that the U.S. Navy had developed a new anti-ship missile (ASM)—the Standard Missile 6 (SM-6). But that “new” missile isn’t as new as it might seem. The SM-6 has been in limited service with the U.S. Navy as its most capable long-range anti-air and anti-missile weapons system since 2013. The SM-6 is estimated to have a range of over 200 nautical miles (370km) and flies at Mach 3.5, giving it the ability to hit an adversary at a long range with little to no warning from defensive radars.

That news comes at a welcome time for many around the world lamenting the U.S. Navy’s lack of a long-range ASM capability. Since retiring the anti-ship variant of the venerable AGM-65 Tomahawk in 1994, the U.S. Navy has been in want of a long range supersonic ASM and has relied upon the slower and shorter ranged RGM-84 Harpoon and SM-2 (the SM-6’s predecessor which had a limited anti-ship capability) missiles to satisfy its surface-to-surface requirements. However, the U.S. Navy isn’t the only state with this capability gap. Years of disinterest in surface warfare, caused by a lack of credible adversaries, have left many western navies (including Australia) far behind the likes of China and Russia in the development of those types of missiles.

Since the 1980s, RAN has relied upon the Harpoon for its ASM capabilities. While extremely versatile (it can be launched from aircraft, ships, and submarines), the Harpoon is capable of only subsonic speeds and has a range of approximately 70 nautical miles (130km). By comparison, China’s newest ASM, the YJ-18, is supersonic and is estimated to have a range of 290 nautical miles (537km). That means that RAN vessels equipped with the Harpoon are not only out-ranged by many potential adversaries, but also have less time to react if fired upon.

That leads to some potentially deadly scenarios for RAN vessels, especially in a contested area of operations. To compensate for the Harpoon’s short range and lower speed, RAN has typically relied upon satellites, submarines, and long-range patrol or strike aircraft to find and defeat potential surface threats long before they can target RAN vessels. In an area of operations where access by friendly ships or aircraft (and the targeting data they provide) may be limited or denied—as is increasingly the case in the South and East China seas—RAN vessels can be ‘out sticked’ by the longer ranged and speedier ASMs of their adversaries.

The new anti-ship variant of the SM-6 is good news, then, for Australia as well. A future acquisition of the SM-6 would provide RAN with a means to partially remedy that capability gap. The incoming three Hobart-class air warfare destroyers (AWDs) incorporate the Mark 41 Vertical Launching System (VLS) which allows them to be equipped with the SM-6. In fact, the Department of Defense’s SEA 1360 project intends to do just that. Under SEA 1360’s timeline, the SM-6’s on the AWDs would reach initial operating capability between FY 2021 and FY 2024.

However, relying on the SM-6 as the AWD’s primary means of long-range attack and defense in the long term could see ship commanders face a worrying dilemma. Using a SM-6 against an enemy surface vessel means that one less that can be used for the AWD’s primary task of air defense. The Mark 41 VLS on the AWD can hold up to 48 individual SM-6 missiles but once its missile supply is exhausted, it can’t replenish stocks until it returns to port. Ship commanders would have to use the SM-6 sparingly in some instances, which isn’t exactly ideal in combat situations.

Part of the long-term solution to that problem is a dedicated long range, supersonic ASM capable of destroying enemy vessels. Absent this, RAN still possesses several options that would be compatible with the Mark 41 VLS fitted to most current and future RAN vessels. One is the Long-Range Anti-Ship Missile (LRASM) under development by the U.S. Navy. While the LRASM’s subsonic speed isn’t ideal, it makes up for it with a range of over 500 nautical miles (926km) and stealth features. It’s designed to use its low observability design and anti-jamming capabilities to get in the ‘kill box’ where it can autonomously identify and attack its target.

Another option is the new anti-ship variant of the Tomahawk, which, in a recent test, was able to hit a moving ship. The Tomahawk is a proven design and boasts a range of 1,000 nautical miles (1,852km), which would give any RAN vessel the ability to target an enemy well before they know it’s there. However, while the Tomahawk is also subsonic, it lacks the stealth features of the LRASM, leaving it more vulnerable to enemy air defenses.

Targeting must also be taken into consideration with any potential acquisition. ASMs are guided by over-the-horizon systems using data transmitted from intelligence gathering platforms (such as satellites, submarines, and electronic intelligence aircraft) in order to get the missile close enough to its target for its terminal seeker to find and attack it. This ‘kill chain’ can be disrupted at each ‘link’, causing the missile to miss its target. It’s therefore critical that RAN ensures it has the networking capabilities (platforms such as the E-7A Wedgetail help in this regard) necessary to give a future ASM the best chance to strike its target.

Whether the U.S. Navy will choose the LRASM or the anti-ship Tomahawk as its primary ASM remains to be seen until the U.S. Navy’s competition for its new anti-ship missile in 2017. Acquiring America’s winner (and the accompanying sensors required for targeting) would help RAN to fill its capability gap by the mid to late 2020s. Until then, the SM-6 will have to do.

Christopher Cowan is an ANU research intern at ASPI. This article first appeared in the Strategist.