The MQ-9 Reaper Is Now Wielding These Deadly New Weapons 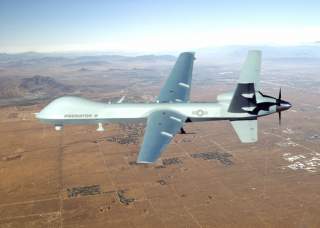 By releasing a GBU-38 Joint Direct Attack Munition from a MQ-9 Reaper in a live weapons exercise, the Air Force made history and vastly widened the attack envelope, target set and mission scope for its workhorse drone.

"For the past 10 years, skilled MQ-9 aircraft aircrew have been employing AGM-114 Hellfire missiles and GBU-12 laser-guided bombs, but the JDAM brings new global positioning system capabilities," a statement from the Air Force News Service said.

"The GBU-38, just like the Hellfire and GBU-12, is a very accurate weapon and the fact that it’s GPS-guided gives us another versatile way to guide the weapon, specifically, through inclement weather onto targets,” Capt. Scott, a 26th WPS weapons instructor pilot, said in an Air Force statement.

Once released from the aircraft, the JDAM autonomously navigates to the designated target coordinates.

Air Force data on JDAMs says target coordinates can be loaded into the aircraft before takeoff, manually altered by the aircrew before weapon release, or automatically entered through target designation with onboard aircraft sensors.

"In its most accurate mode, the JDAM system will provide a weapon circular error probable of 5 meters or less during free flight when GPS data is available. If GPS data is denied, the JDAM will achieve a 30-meter CEP or less for free flight times up to 100 seconds with a GPS quality handoff from the aircraft," an Air Force statement said.

JDAMs can be launched from very low to very high altitudes in a dive, toss or loft and in straight and level flight with an on-axis or off-axis delivery, service information adds.

Adding more fire-power to the Reaper is an effort which has been underway for at least several years, senior Air Force officials explained.

In an interview in 2015, the Air Force Military Deputy for Acquisition, Lt. Gen. Arnold Bunch, told Scout Warrior that the service had begun the process of adding new weapons to the Reaper, a process which will likely involve engineering a universal weapons interface.

“We are looking at what kind of weapons do we need to integrate in. We're looking at anything that is in our inventory, including the small diameter bomb. We're working to get universal armament interface with an open mission systems architecture,” Bunch said.

Drone attacks from further ranges could reduce risk to the platform and help strikes against Al Qaeda or ISIS targets to better achieve an element of surprise. At the same time, the GBU-38 is also designed for major-scale force-on-force warfare against a near-peer.

Furthermore, additional air-to-surface guided weapons could add mission possibilities to the current Hellfire and laser-guided bombs able to hit smaller and mobile targets, enabling the Reaper drone to have success with attacks against groups of ISIS or other enemy fighters that reduce the risk of hurting nearby civilians. Both ISIS and Al Qaeda are known for deliberately seeking to blend in with civilian populations to better protect themselves from U.S. drone strikes.

Other potential advantages to adding to the arsenal of weapons able to fire from the include an improved ability to strike smaller targets, mobile targets or terrorists, such as groups of enemy fighters on-the-move in pick-up trucks and enemies at further ranges.

Another new possibility for the Reaper drone could be the addition for the GBU-39B or Small Diameter Bomb, Bunch said.