The Navy Is Closer to Getting Its Next Nuclear Armed Submarine 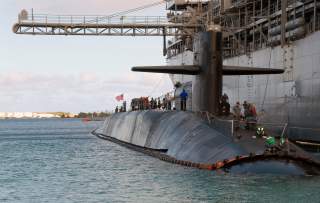 The Navy 2019 budget request increases funding for the service's new nuclear-armed ballistic missile submarine by $2 billion over this year's amount in what appears to be a clear effort to further accelerate technology development and early production. The request, which marks a substantial move on the part of the Navy and DoD, asks for $3.7 billion in 2019, up from $1.9 billion in 2018. The new budget effort is quite significant, given that there has been a chorus of concern in recent years that there would not be enough money to fund development of the new submarines, without devastating the Navy shipbuilding budget.

The Columbia-class plus-up is a key element of a cross-the-board Navy budget increase; overall, the Navy 2019 request jumps $14 billion over this year, climbing to to $194 billion.

Many regard the Columbia-Class submarines, slated to enter service in the early 2030s, as the number one DoD priority, and it is quite possible the additional dollars will not only advance technical development and early construction, but may also move the entire production timeline closer.

Perhaps of equal or greater significance is the fast-evolving current global threat environment which, among other things, brings the realistic prospect of a North Korean nuclear weapons attack. Undersea strategic deterrence therefore, as described by Navy leaders, brings a critical element of the nuclear triad by ensuring a second strike ability in the event of attack. The submarines are intended to quietly patrol lesser known portions of the global undersea domain. Ultimately, the Navy hopes to build and operate as many as 12 new nuclear-armed submarines, to be in service by the early 2040s and serve well into the 2080s.

Unless timelines are accelerated, which appears likely, construction on the first submarine in this new class is slated to be finished up by 2028, with initial combat patrols beginning in 2031, service officials said. Navy nuclear-armed ballistic missile submarines are intended to perform a somewhat contradictory, yet essential mission. By ensuring the prospect of massive devastation to an enemy through counterattack, weapons of total destruction can – by design – succeed in keeping the peace.

Although complete construction is slated to ramp up fully in the next decade, Navy and General Dynamics Electric Boat developers have already been prototyping key components, advancing science and technology efforts and working to mature a handful of next generation technologies.

With this in mind, the development strategy for the Columbia-Class could well be described in terms of a two-pronged approach; in key respects, the new boats will introduce a number of substantial leaps forward or technical innovations - while simultaneously leveraging currently available cutting-edge technologies from the Virginia-Class attack submarines, Navy program managers have told Warrior in interviews over the years.

While Navy developers explain that many elements of the new submarines are not available for discussion for security reasons, some of its key innovations include a more efficient electric drive propulsion system driving the shafts and a next-generation nuclear reactor. A new reactor will enable extended deployment possibilities and also prolong the service life of submarines, without needing to perform the currently practiced mid-life refueling.

By engineering a "life-of-ship" reactor core, the service is able to build 12 Columbia-Class boats able to have the same at sea presence as the current fleet of 14 ballistic missile submarines. The plan is intended to save the program $40 billion savings in acquisition and life-cycle cost, Navy developers said.

Regarding development of the US-UK Common Missile Compartment, early "tube and hull" forging have been underway for several years already.

The Columbia-Class will also use Virginia-class’s next-generation communications system, antennas and mast. For instance, what used to be a periscope is now a camera mast connected to fiber-optic cable, enabling crew members in the submarine to see images without needing to stand beneath the periscope. This allows designers to move command and control areas to larger parts of the ship and still have access to images from the camera mast, Electric Boat and Navy officials said.

The Columbia-Class will utilize Virginia-class’s fly-by-wire joystick control system and large-aperture bow array sonar. The automated control fly-by-wire navigation system is also a technology that is on the Virginia-Class attack submarines. A computer built-into the ship's control system uses algorithms to maintain course and depth by sending a signal to the rudder and the stern, a Navy Virginia Class program developer told Warrior Maven in a previous interview.

Sonar technology works by sending out an acoustic ping and then analyzing the return signal in order to discern shape, location or dimensions of an undersea threat.

In January of last year, development of the new submarines have passed what's termed "Milestone B," clearing the way beyond early development toward ultimate production.